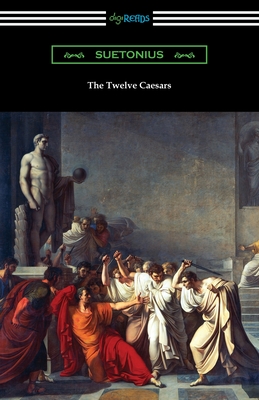 By Suetonius, Alexander Thomson (Translator)
Email or call for price

Written by Gaius Suetonius Tranquillus in 121 AD while he was the personal secretary to emperor Hadrian, "The Twelve Caesars" is a series of twelve biographies of Roman rulers beginning with Julius Caesar and ending with Domitian. The tales of Rome's emperors are deeply personal and informative, while also entertaining and often filled with drama. Suetonius included invaluable descriptions of the rulers' public and private lives, physical appearances, family heritages, and daily personal habits. "The Twelve Caesars" is the primary source for many of the most famous and enduring tales of ancient Rome, from Julius Caesar's revenge on the pirates that kidnapped him, to the excesses and scandal of Caligua, to the drama of Nero's rule, and finally to the end of the Flavian empire. The biographies have been viewed since antiquity as a very significant account of the critical era in Roman history known as the Principate period, which begins with the end of Republic, continues through the violent unrest and civil war of Nero's rule, and is followed by the restoration of order afterwards. Fascinating and engrossing, "The Twelve Caesars" remains one of the most important historical bibliographical works of the Roman Empire. This edition is printed on premium acid-free paper.