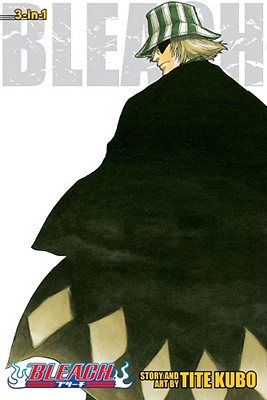 Part-time student, full-time Soul Reaper, Ichigo is one of the chosen few guardians of the afterlife.

Ichigo Kurosaki never asked for the ability to see ghosts—he was born with the gift. When his family is attacked by a Hollow—a malevolent lost soul—Ichigo becomes a Soul Reaper, dedicating his life to protecting the innocent and helping the tortured spirits themselves find peace. Find out why Tite Kubo’s Bleach has become an international manga smash-hit!

A new reality-show craze is sweeping the nation, garnering legions of screaming fans (the majority of them being teenaged girls). But this program comes with a supernatural twist--the host, a media-savvy spiritualist, travels to local hotspots and performs exorcisms, live on national TV! Surly Soul Reaper Ichigo Kurosaki has his doubts about this primetime prima donna, and his assumptions are about to be put to the test--the show is heading straight for his neighborhood! What effect will this unprovoked media presence have on the fragile balance between Earth and the spirit world?

Bleach is author Tite Kubo's second title. Kubo made his debut with ZOMBIEPOWDER., a four-volume series for Weekly Shonen Jump. To date, Bleach has been translated into numerous languages and has also inspired an animated TV series that began airing in Japan in 2004. Beginning its serialization in 2001, Bleach is still a mainstay in the pages of Weekly Shonen Jump. In 2005, Bleach was awarded the prestigious Shogakukan Manga Award in the shonen (boys) category.