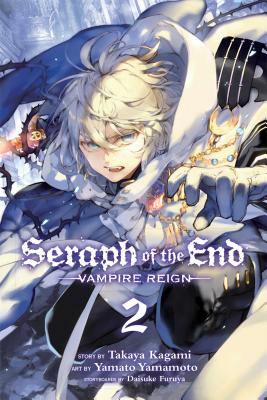 In a post-apocalyptic world of vampires vs. humans, Yuichiro brings vengeance upon his vampire overlords!

After trumpets of the apocalypse proclaim the fall of humanity, vampires arise from the shadows to rule the earth. Yuichiro wants just one thing—to get revenge by killing each and every vampire.

Now that Yuichiro has earned his place in the Japanese Imperial Demon Army, he prepares to undergo a fiendish test to acquire the most powerful and deadly of humanity’s weapons against vampires—Black Demon Series Cursed Gear. Meanwhile, the vampire nobility welcome a new member—Mika, the best friend Yuichiro thinks died in their escape but who has his own bitter story of survival.

Takaya Kagami is a prolific light novelist whose works include the action and fantasy series The Legend of the Legendary Heroes, which has been adapted into manga, anime and a video game. His previous series, A Dark Rabbit Has Seven Lives, also spawned a manga and anime series.