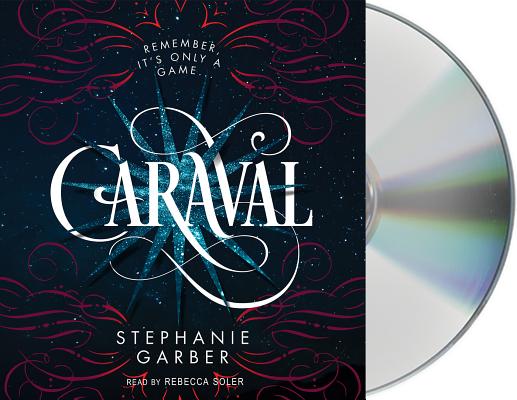 By Stephanie Garber, Rebecca Soler (Read by)
Email or call for price

This is book number 1 in the Caraval series.

Scarlett and her sister, Tella, have longed to be a part of Caraval ever since they were little. When they finally get the chance to attend, Scarlett, a newly engaged young woman, is no longer sure it is the right thing to do. Tella, however, has other plans.

With the help of a roguish sailor, Tella brings Scarlett to Caraval but when they wash up on the island, Tella is nowhere to be found. Scarlett and the sailor, Julian, are left to carry on to Caraval to find her. The catch?  Tella has been taken by Legend, the mysterious maker of Caraval itself and finding her is the object of the game.

Now, Scarlett and Julian must stay one step ahead of the other players to find Tella. But who can you trust when you are told to trust no one and that nothing is as it seems?  Caraval is absolutely spellbinding, engrossing and just plain magical. I could not put it down for even a minute!

"Actor Soler's lively narration swiftly draws listeners into the magical spectacle at the center of Garber's YA novel" — Publishers Weekly, best audiobooks of 2017

This program includes a bonus interview with the author.

Welcome, welcome to Caraval — Stephanie Garber’s sweeping tale of two sisters who escape their ruthless father when they enter the dangerous intrigue of a legendary game.

Scarlett has never left the tiny island where she and her beloved sister, Tella, live with their powerful, and cruel, father. Now Scarlett’s father has arranged a marriage for her, and Scarlett thinks her dreams of seeing Caraval, the far-away, once-a-year performance where the audience participates in the show, are over.

But this year, Scarlett’s long-dreamt of invitation finally arrives. With the help of a mysterious sailor, Tella whisks Scarlett away to the show. Only, as soon as they arrive, Tella is kidnapped by Caraval’s mastermind organizer, Legend. It turns out that this season’s Caraval revolves around Tella, and whoever finds her first is the winner.

Scarlett has been told that everything that happens during Caraval is only an elaborate performance. But she nevertheless becomes enmeshed in a game of love, heartbreak, and magic with the other players in the game. And whether Caraval is real or not, she must find Tella before the five nights of the game are over, a dangerous domino effect of consequences is set off, and her sister disappears forever.

Stephanie Garber loves Disneyland because it’s the one place on earth where she feels as if the fantastical stories she loves to write about could actually come to life. She is the #1 New York Times and internationally bestselling author of the Caraval series and Once Upon a Broken Heart. Her work has been translated into over thirty languages.

Rebecca Soler is a film and voiceover actress who won a 2009 AudioFile Earphones Award for her narration of After by Amy Efaw. Her audiobook credits include work by authors such as Judy Blume, James Patterson and Sarah Dessen. Soler has also narrated the popular young adult series The Lunar Chronicles by Marissa Meyer. Her voice over credits include various video games, like Star Wars: The Old Republic and Red Dead Redemption and television shows such as Pokemon, Yu-Gi-Oh, and Teenage Mutant Ninja Turtles. She lives in New York City.

Inlcuded in Publishers Weekly Best Audiobooks of 2017 list (YA category)

"Rebecca Soler is an ideal listener's companion through a heady world...Soler imbues each descriptive passage with exhilaration and wonder, providing a vivid sensory experience in which listeners will easily lose themselves."-AudioFile Magazine

"Actor Soler’s narration, by turns curious, afraid, frustrated, and exhilarated, immediately draws the listener into this world. In a story full of colorful characters, she gives each one a distinct voice that is faithful to their descriptions in the text."-Publishers Weekly, Starred Review