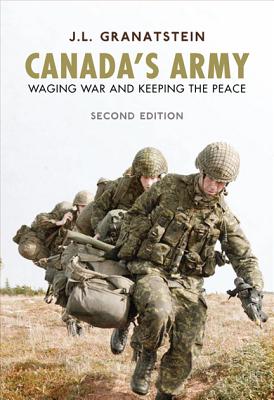 By J. L. Granatstein
Email or call for price.
Out of Print

The first edition of Canada's Army quickly became the definitive history of the Canadian army. The intervening years, though, have seen major changes to how Canadians think about their military, especially in the context of the Afghan War and increased federal funding for the Canadian Forces. In this second edition of Canada's Army, J.L. Granatstein-one of the country's leading historians-brings his work up to date with fresh material on the evolving role of the military in Canadian society, along with updated sources and illustrations.

Canada's Army traces the full three-hundred year history of the Canadian military from its origins in New France to the Conquest, the Revolutionary War and the War of 1812; from South Africa and the two World Wars to the Korean War and contemporary peacekeeping efforts, and the War in Afghanistan. Granatstein points to the inevitable continuation of armed conflict around the world and makes a compelling case for Canada to maintain properly equipped and professional armed forces.

Canada's Army offers a rich analysis of the political context for the battles and events that shaped our understanding of the nation's military. Masterfully written and passionately argued, this book has been lauded as 'belong ing] on all concerned citizens' bookshelves.'