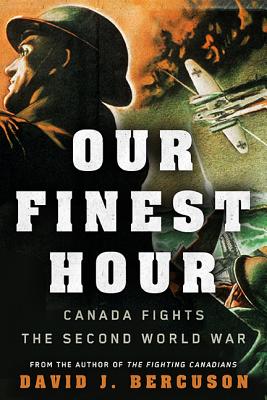 First published in 1995 as Maple Leaf Against the Axis, Our Finest Hour has been completely revised and updated, with new chapters that reflect the latest research about Canada's home front in the war and the formulation and execution of Canadian war strategy at the highest levels. Although Canada was not ready for war in 1939, the people of Canada and their armed forces eventually overcame major challenges—from the building of tanks, planes, ships and trucks and the production of huge amounts of grain, meat and vegetables to the creation of the only full Canadian field army in history and a navy and air force crucial to Allied victory. From Hong Kong to the Rhine River Crossing, Our Finest Hour delves incisively into the pivotal battles of the Second World War and the roles of the Canadian army, navy and air force. Bestselling author David Bercuson probes the war on the ground, on the seas and in the air—from the bomber offensive over Germany to the Typhoon fighter squadrons with the Second Tactical Air Force in Europe. With an unfliching eye, he provides insight into the successes and failures, triumphs and shortcomings of the Canadian military.

Our Finest Hour is at once a masterpiece of historical narrative and a celebration of a growing country's contribution during the Second World War.

DAVID J. BERCUSON has written fourteen works of Canadian and other military history, including regimental histories of the Calgary Highlanders and Princess Patricia’s Canadian Light Infantry; Blood on the Hills: The Canadian Army in the Korean War; a history of the sinking of the German battleship Bismarck; and The Fighting Canadians: Our Regimental History from New France to Afghanistan. He holds the J.B. Tyrrell Gold Medal for the writing of Canadian history awarded by the Royal Society of Canada and is an Officer of the Order of Canada. He teaches Canadian military history at the University of Calgary, where he also directs the Centre for Military and Strategic Studies.

“The most comprehensive short survey of Canada’s fighting that is available in print.”
— Canada’s History