One Soldier: A Canadian Soldier's Fight Against the Islamic State (Paperback) 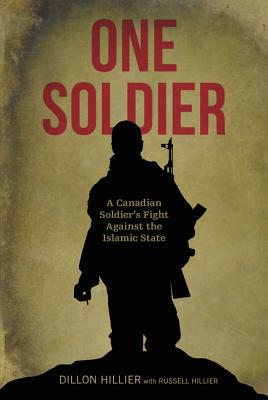 By Dillon Hillier, Russell Hillier
$17.99
Email or call for price.

Finalist for the Speaker’s Book Award

Dillon Hillier, a corporal with the Princess Patricia’s Canadian Light Infantry, returned home from a tour in Afghanistan and started up a normal life. But when ISIS insurgents began attacking local populations in Iraq and elsewhere, Hillier, a long-time soldier, felt he had to join in the action, so he sold his truck, lied to his parents about where he was going and became the first Canadian to volunteer to fight ISIS in Iraq

For three months, Dillon accompanied the Kurdish army as they fought a series of battles against the Islamic State throughout northern Iraq. During his mission, Dillon saw combat, experienced life in the trenches, partnered with a former US Marine, had a bounty placed on his head and learned an important truth: that in the chaos of war, the difference between life and death is measured in inches, and some things can never be forgotten.

One Soldier is about Hillier’s three months fighting with the Kurds in Iraq, on the front lines. The only reason Dillon’s tour wasn’t longer was because the government wanted him back home, safe and sound.

Dillon Hillier was a corporal in the Princess Patricia’s Canadian Light Infantry, endured a tour in Afghanistan and fought ISIS in Iraq. He lives in Toronto.

Russell Hillier is a teacher, with experience working on Parliament Hill and in the Army Reserves. He lives in Calgary.

“The raw, personal memoir of a Canadian driven by conscience to stand against the inhumanity of terrorism.”
— National Post

“What comes through in the book is the adrenaline of being on the front lines.”
— The Globe and Mail

“In 2014, Dillon Hillier quit his job, bought a plane ticket to Iraq and took up arms against ISIS. His new book, One Soldier, reveals what it’s like to be one of the West’s first rogue fighters.”
— Toronto Life

“A vivid and enlightening account of one Canadian’s role in a war most Canadians are only intermittently aware that our country has joined. A very rewarding read.”
— Conrad Black, bestselling author of Rise to Greatness and A Matter of Principle