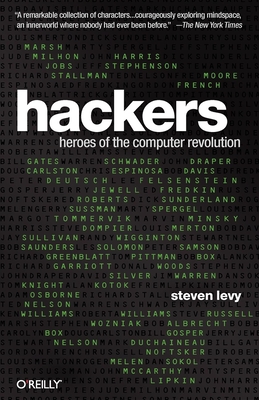 This 25th anniversary edition of Steven Levy's classic book traces the exploits of the computer revolution's original hackers -- those brilliant and eccentric nerds from the late 1950s through the early '80s who took risks, bent the rules, and pushed the world in a radical new direction. With updated material from noteworthy hackers such as Bill Gates, Mark Zuckerberg, Richard Stallman, and Steve Wozniak, Hackers is a fascinating story that begins in early computer research labs and leads to the first home computers.

Levy profiles the imaginative brainiacs who found clever and unorthodox solutions to computer engineering problems. They had a shared sense of values, known as the hacker ethic, that still thrives today. Hackers captures a seminal period in recent history when underground activities blazed a trail for today's digital world, from MIT students finagling access to clunky computer-card machines to the DIY culture that spawned the Altair and the Apple II.

Levy is a senior writer for Wired. Previously, he was chief technology writer and a senior editor for Newsweek. Levy has written six books and had articles published in Harper's, Macworld, The New York Times Magazine, The New Yorker, Premiere, and Rolling Stone. Steven has won several awards during his 30] years of writing about technology, including Hackers, which PC Magazine named the best Sci-Tech book written in the last twenty years and, Crypto, which won the grand eBook prize at the 2001 Frankfurt Book festival.