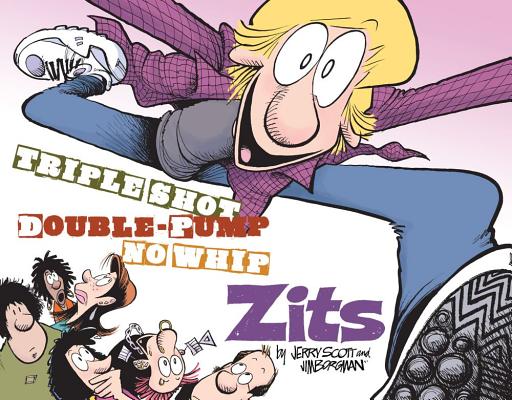 This is book number 29 in the Zits series.

Zits is the perfect comic portrayal of life, with an eye-rolling teenager and perplexed but connected parents.

Sixteen-year-old Jeremy Duncan is a high school sophomore and an aspiring musician. He daydreams about the day when his band records its first monster hit single and he and his bandmates all pile into his van for their cross-country, sold-out concert tour. Between naps, study hall, and band practice, Jeremy still manages to find time to be the star of this hugely popular comic strip.

Jeremy is a good kid. He is intelligent and kind, yet he still has the attitude that one would expect from a teenager. His unpredictable mood swings and monosyllabic answers to his parents’ mild-mannered questions often leave them baffled and bemused.

Zits was created in 1997 by Pulitzer Prize– and Reuben Award–winning editorial cartoonist Jim Borgman and Reuben Award–winning cartoonist/writer Jerry Scott. The creators, who are parents themselves, have a keen insight into the many physical and emotional changes that teens go through during adolescence, and they have the gift of addressing these common dilemmas with compassion and humor.