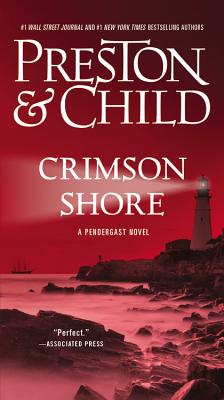 This is book number 15 in the Agent Pendergast Series series.

When a straightforward murder case spirals out of control, Pendergast and his ward investigate an ancient witches' colony in a sleepy New England town where a terrible evil awaits . . .
A secret chamber.
A mysterious shipwreck.
A murder in the desolate salt marshes.

A seemingly straightforward private case turns out to be much more complicated-and sinister-than Special Agent A.X.L. Pendergast ever could have anticipated.
Pendergast, together with his ward Constance Greene, travels to the quaint seaside village of Exmouth, Massachusetts, to investigate the theft of a priceless wine collection. But inside the wine cellar, they find something considerably more disturbing: a bricked-up niche that once held a crumbling skeleton.

Pendergast and Constance soon learn that Exmouth is a town with a very dark and troubled history, and this skeleton may be only the first hint of an ancient transgression, kept secret all these years. But they will discover that the sins of the past are still very much alive. Local legend holds that during the 1692 witch trials in Salem, the real witches escaped, fleeing north to Exmouth and settling deep in the surrounding salt marshes, where they continued to practice their wicked arts. Then, a murdered corpse turns up in the marshes. The only clue is a series of mysterious carvings. Could these demonic symbols bear some relation to the ancient witches' colony, long believed to be abandoned?

A terrible evil lurks beneath the surface of this sleepy seaside town-one with deep roots in Exmouth's grim history. And it may be that Constance, with her own troubled past, is the only one who truly comprehends the awful danger that she, Pendergast, and the residents of Exmouth must face . . .

"Small-town politics, murder, a century-old conspiracy, arson and a detective who embodies a modern-day Holmes add up to an amazing journey."—Associated Press on White Fire

"These dynamic authors' best thriller to date."—White Fire was one of Library Journal's Top 10 Thrillers of 2013

"Sherlock Holmes fans will relish Preston and Child's 13th novel featuring eccentric FBI agent Aloysius Pendergast (after 2012's Two Graves), one of their best in this popular series...easily stands on its own with only passing references to Pendergast's complex backstory."—Publishers Weekly (starred review) on White Fire

"Another highly entertaining and genuinely thrilling story from Preston & Child starring their romantic, faintly gothic, and always mysterious FBI agent, Aloysius Pendergast. As always the prose is elegant, replete with exquisite descriptions, and this time we're treated to dashes of historic characters Conan Doyle and Oscar Wilde, as well as a positively delicious serving of the great Sherlock Holmes. Through myriad shocks, surprises, twists and turns, the suspense never lets up. Great fun to the last page."—Anne Rice on White Fire

"The best Pendergast book yet - a collision between past and present that will leave you breathless."—Lee Child on White Fire

"Preston and Child have done it again! WHITE FIRE continues their white hot streak of bestselling suspense as the most eccentric and ruthlessly clever FBI agent in the business, Pendergast, takes on old money and even older secrets with some literary help from Sherlock Holmes. Simply brilliant!"—Lisa Gardner

"What Preston and Child are so good at are exemplified here: solid research, clear swift prose and enough twists to fill a jar of pretzels. Sit back, crack open the book and get ready for the ride of your life."—David Baldacci

"WHITE FIRE is a perfect introduction for any reader not yet acquainted with A.X.L. Pendergast, one of the most memorable detectives in contemporary thrillerdom."—Steve Berry

"I've read every Pendergast thriller. This is the most suspenseful and most horrifying of them all. This book holds chills you can't imagine. I'm still shuddering. I promise-- you'll shudder, too."—R.L. Stine

"A mile-a-minute thriller with a deeply entertaining plot and marvelous characters, in a setting that will chill your blood, and not only because it's 10 degrees below zero and covered with snow. My copy is full of crumbs because I couldn't put it down long enough to eat."—Diana Gabaldon

"WHITE FIRE is as incandescent as its title, a beautifully organized, tautly paced book that really did just yank me in and demand that I keep reading. I'm very grateful for the experience."—Peter Straub

"Preston and Child have created a terrific mix of mystery and the unexpected that will keep you reading into the late hours of the night. They promise a great read and they have delivered."—Clive Cussler