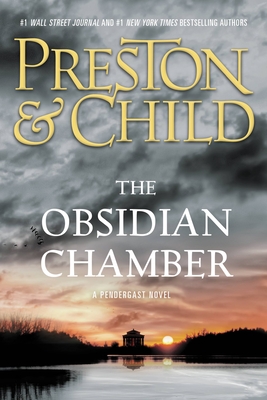 This is book number 16 in the Agent Pendergast Series series.

After Pendergast is presumed dead from a supernatural encounter, his bodyguard Proctor is the only one who can chase a kidnapper across international waters and into the deadly unknown.
A TRAGIC DISAPPEARANCE
After a harrowing, otherworldly confrontation on the shores of Exmouth, Massachussetts, Special Agent A.X.L. Pendergast is missing, presumed dead.
A SHOCKING RETURN
Sick with grief, Pendergast's ward, Constance, retreats to her chambers beneath the family mansion at 891 Riverside Drive--only to be taken captive by a shadowy figure from the past.
AN INTERNATIONAL MANHUNT
Proctor, Pendergast's longtime bodyguard, springs to action, chasing Constance's kidnapper through cities, across oceans, and into wastelands unknown.
BUT IN A WORLD OF BLACK AND WHITE, NOTHING IS AS IT SEEMS
And by the time Proctor discovers the truth, a terrifying engine has stirred-and it may already be too late . . .

"The latest novel in Preston & Child's Pendergast series picks up from the cliffhanger-ending of CRIMSON SHORE and doesn't let up. The authors keep readers guessing... The crisp writing and exemplary stories are still in abundance in this consistently exciting and never predictable series."—Jeff Ayers, Associated Press

"As any reader of suspense knows, Douglas Preston and Lincoln Child write a series of books featuring one of the best characters in the history of suspense literature: Aloysius Pendergast. [THE OBSIDIAN CHAMBER is] an excellent story by these two unbelievably talented authors. A page-turner, a deluxe suspense, a perfect mystery--Preston & Child remain the best of the best and never let their huge fan base down!"—Suspense Magazine

"It's like Christmas for lovers of suspense when the words Preston & Child once again appear on a book cover. It's a truly great Christmas when the main character of that novel is Aloysius X.L. Pendergast. For those who have read these books voraciously, it's not a surprise to learn that this latest tale is one that will keep you riveted until the very end...Preston & Child continue to make these books the absolute best there is in the suspense realm."—Suspense Magazine on Crimson Shore

"New readers will be hooked...Die-hard fans will add this to their must-read lists."—Library Journal (Starred Review) of Crimson Shore - November 2015 LibraryReads Pick

"Fast-moving, sophisticated and bursting with surprises... If you're willing to surrender to Preston and Child's fiendish imaginations, you might devour the Pendergast books the way kids do Halloween candy...There's nothing else like them."—The Washington Post on Blue Labyrinth

"Preston & Child once again bring A.X.L. Pendergast to life and offer up a host of thrills, heart-pumping action, and an intricate plot that pits a vengeful killer against (still) the most interesting character in fiction."—Suspense Magazine on Blue Labyrinth

"These dynamic authors' best thriller to date."—White Fire was one of Library Journal's Top 10 Thrillers of 2013

"The best Pendergast book yet - a collision between past and present that will leave you breathless."—Lee Child on White Fire

"A mile-a-minute thriller with a deeply entertaining plot and marvelous characters, in a setting that will chill your blood, and not only because it's 10 degrees below zero and covered with snow. My copy is full of crumbs because I couldn't put it down long enough to eat."—Diana Gabaldon on White Fire