The Diary of an Artillery Officer: The 1st Canadian Divisional Artillery on the Western Front (Paperback) 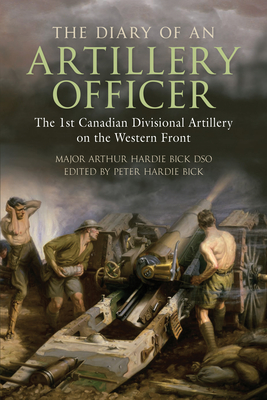 The Diary of an Artillery Officer recounts the work of the 1st Divisional Artillery in 1918 when it spearheaded attacks on various European battlefields.

In the First World War the Canadian Field Artillery led the way in artillery technology and tactics. By coordinating the intelligence reports from sound ranging, flash spotting, and ground observation teams, they became one of the most effective fighting units in France. These tactics were first used at Vimy Ridge in April 1917, destroying most of the German artillery before the assault began. The close coordination between the attacking infantry divisions and the Canadian Field Batteries not only allowed the infantry to advance very close to the falling shells but also gave them confidence that, unlike at the Battle of the Somme, the Germans wouldn t be able to recover in time to defend their positions properly. "The Diary of an Artillery Officer," written by Major Arthur Hardie Bick, DSO, covers the work of the 1st Divisional Artillery in 1918 when it spearheaded the attacks on Amiens, the Vis en Artois Switch (defending the Hindenburg Line) and the Canal du Nord, and the final blows in Germanys defeat.

Major Arthur Hardie Bick, DSO, worked as a civil engineer on aviation sites in the United Kingdom until his death in an aviation accident in 1948. His son, Peter Hardie Bick, edited The Diary of an Artillery Officer, providing a detailed and informative commentary on the role of the 1st Divisional Artillery on the Western Front in 1918.