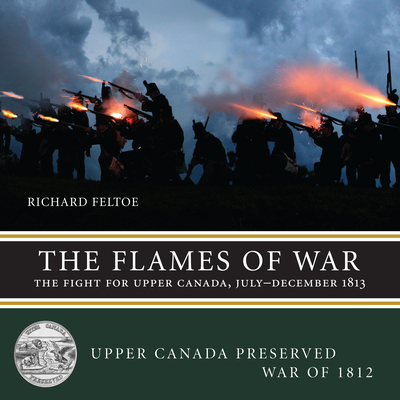 This is book number 3 in the Upper Canada Preserved -- War of 1812 series.

The third in a series of unique surveys of the battles in the War of 1812.

In April 1813 the Americans launched a new campaign to conquer Upper Canada, after their failure to do so in 1812. However, following initial victories, the U.S. assault stalled as a combined force of British regulars, Canadian militia, and Native allies counterattacked, throwing the Americans entirely onto the defensive by the end of June. During the next six months, this seesaw of military advantage was repeated again and again as each side escalated its commitment of men and resources and fought to gain the final victory. Unfortunately, this also brought with it an increasing level of destruction and hardship suffered by armies and civilian populations on both sides of the border.

Numerous images of locations at the time are counterpointed with modern pictures taken from the same perspective to give a true then-and-now effect. Maps are also included to trace the course of individual battles stage by stage, while placing and moving the shifting formations of troops across a geographically accurate battlefield.

This third volume in the six-part series Upper Canada Preserved -- War of 1812 recounts the dramatic and destructive campaigns in the last six months of 1813 as the Americans continued their remounted attack on Upper Canada.

Richard Feltoe was born in Newcastle-upon-Tyne and holds a degree in economics from the University of London. He is the curator and corporate archivist for the Redpath Sugar Museum and is active as a living history reenactor, re-creating the life of a Canadian militia soldier from the War of 1812. His other publications include Redcoated Ploughboys and The Call to Arms. He lives in Brampton, Ontario.