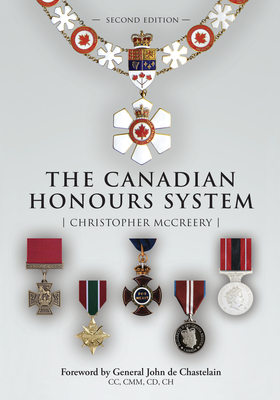 This expanded and updated edition of The Canadian Honours System surveys the history of Canada's various orders, decorations, and medals, from New France's Croix de St. Louis, Britain's the Order of the Bath, to modern Canadian honours such as the Sacrifice Medal and recently created Polar Medal. Since the establishment of the Order of Canada in 1967, the Canadian honours system has grown to become one of the most comprehensive in the world -- with more than 300,000 Canadians having been rewarded over the past fifty years.

Each honour in the modern Canadian honours system, and its precursor, the British imperial honours system, is examined here in detail, including historical background, design, and criteria for bestowal. With special chapters on heraldry, protocol, and the proper mounting and wearing of medals, The Canadian Honours System is an essential reference for anyone interested in Canadian honours.

Christopher McCreery holds a doctorate in Canadian political history from Queen_'s University and is the author of more than ten books. He is private secretary to the Lieutenant Governor of Nova Scotia, serves on the Board of Trustees of the Canadian Museum of History/Canadian War Museum, and is a fellow of the Royal Canadian Geographical Society. In 2010 he was appointed a Member of the Royal Victorian Order by Her Majesty the Queen. He lives in Halifax.