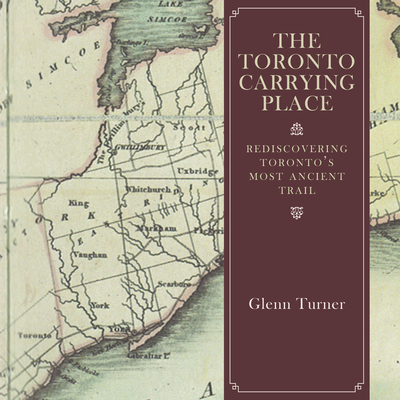 Buried beneath Toronto's streets is a centuries-old trail that was once the road to wealth, adventure, or violent death for thousands of travellers. Now its route lies hidden and forgotten under sidewalks and farmland, though its influence can still be seen.

The Toronto Carrying Place brings Southern Ontario's most important First Nations trail back to life. Retracing the ancient portage from Lake Ontario to Lake Simcoe, Glenn Turner reveals the dramatic events and extraordinary characters that marked Toronto's earliest days, and shows how the path played a crucial role in the history of the Wendat (Huron), Haudenosaunee (Iroquois), and Mississauga First Nations. Toronto's French and English heritage is also explored, and reminders of the Carrying Place are discovered in unlikely places along its forty-five-kilometre route. Many photographs, maps, and reproductions offer both hikers and armchair voyageurs a look at what remains today of this fascinating portage trail, and an insight into how it has affected the growth of the Greater Toronto Area.

Glenn Turner is a teacher-librarian with a career spanning three decades. His writing has appeared in numerous magazines including School Libraries in Canada and Preview. His interest in the Toronto Carrying Place trail stretches back to teenage summers on the banks of the Humber. He lives in Ottawa.