Birth of a Legend: The Bomber Mafia and the Y1b-17 (Paperback) 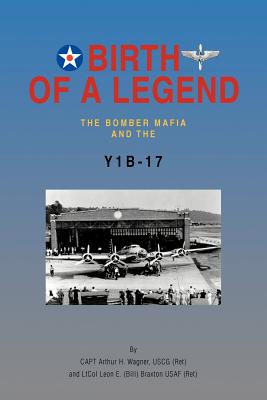 Competition for Army acquisition funding in the betrween wars depression years was fierce. The opposing camps of Fighter Supremacy versus Strategic Bombing played out at the Air Corps Tactical School (ACTS), at GHQ, before Congress and in the media. Military exercises pitted the Navy and the Air Corps in operations with real cloak and dagger background gambits, each trying to gain the upper hand. When leaders such as Benjamin Foulois, Billy Mitchell, and Frank Andrews eventually were able to foster a bomber competition to replace the Martin B-10, Boeing's four-engined Model 299 was a clear winner; but then it crashed at Dayton, and the Army opted for the Douglas B-18. Somehow, Frank Andrews had enough faith in his convictions and managed to have 13 Y1B-17s produced and sent to the 2nd Bombardment Group at Langley Field, VA. There Robert Olds and his three squadrons enthralled the country with long range goodwill flights, transcontinental speed runs with an obscure 1st Lt Curtis leMay navigating the way, and a thrilling movie "Test Pilot" starring Clark Gable, Myrna Loy, and Spencer Tracy. Fortunately for the trials of WWII, these daring young men of the Army Air Corps put their careers on the line, and made the B-17 one of the iconic weapons of that conflict. This is the untold story of the aircraft development and the men who made it happen.