USS Lawrence vs HMS Detroit: The War of 1812 on the Great Lakes (Duel) (Paperback) 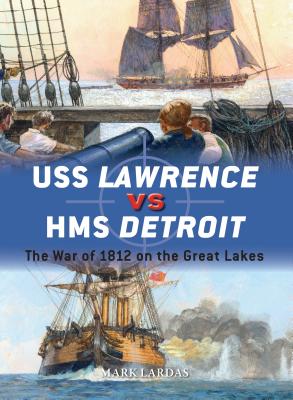 Most of the critical naval fighting during the War of 1812 took place, not on the high seas, but on the inland lakes of North America: the Great Lakes and Lake Champlain. Carrying between 12 and 22 cannon, the British and American sloops-of-war were ship-rigged, brig-rigged or schooner-rigged vessels with their guns on a single deck. Actions often involved two ships facing each other broadside to broadside, the best example of which was the battle of Lake Erie in 1813 where HMS Detroit led a Royal Navy squadron against the USS Lawrence-led US Navy.

Featuring full-color artwork, this lively study investigates the prolonged struggle between British and US sloops-of-war, highlighting the differences between the war on the lakes and the war on the oceans during the Age of Fighting Sail. It reveals the circumstances under which these ships were built, how they were armed, and the human story behind their construction and use in battle.

Mark Lardas holds a degree in Naval Architecture and Marine Engineering, but spent his early career at the Johnson Space Center doing Space Shuttle structural analysis, and space navigation. An amateur historian and a long-time ship modeller, Mark Lardas is currently working in League City, Texas. He has written extensively about modelling as well as naval, maritime, and military history.

Paul Wright has painted ships of all kinds for most of his career, specializing in steel and steam warships from the late 19th century to the present day. A Member of the Royal Society of Marine Artists, Paul lives and works in Surrey, UK.

"Lardas’ account of not only Great Lakes clashes, but the men who commanded and manned the vessels, gives the reader a broad and realistic account of naval combat in the 18th and 19th centuries. The author underscores problems faced finding competent commanding officers, experienced crews and marines to man vessels." - Toy Soldier & Model Figure