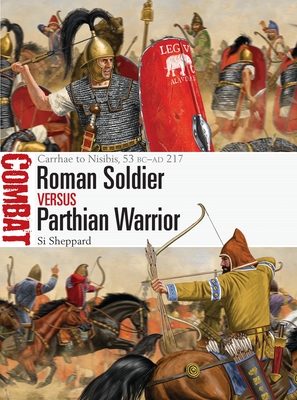 This fascinating book explores the epic clash between two ancient empires in a 250-year conflict which would define the boundaries of the ancient world for more than seven centuries.

In 53 BC, Roman and Parthian forces collided in a confrontation that would reshape the geopolitical map and establish a frontier between East and West that would endure for the next 700 years. From the initial clash at Carrhae through to the battle of Nisibis more than 250 years later, Roman and Parthian forces fought a series of bloody campaigns for mastery of the Fertile Crescent.

As Roman forces thrust ever deeper into the East, they encountered a civilization unlike any they had crossed swords with before. Originating in the steppes of Central Asia, the Parthians ruled a federated state stretching from the Euphrates to the Indus. Although Rome's legions were masters of the battlefield in the Mediterranean, the Parthians refused to fight by the rules as Rome understood them. Harnessing the power of the composite bow and their superior maneuverability, the Parthians' mode of warfare focused exclusively on the horse. They inflicted a bloody defeat on the legions at Carrhae and launched their own invasion of Roman territory, countered only with great difficulty by Rome's surviving forces. The Parthians were eventually thrown out, but neither side could sustain a permanent ascendancy over the other and the conflict continued.

Packed with stunning artwork, including battlescenes, maps, and photographs, this title examines the conflict through the lens of three key battles, revealing a clash between two armies alien to each other not only in culture but also in their radical approaches to warfare.

London-born Si Sheppard completed his Bachelors and Masters degrees in New Zealand before receiving his doctorate from Johns Hopkins University in the United States. He is currently an associate professor of political science and international relations at Long Island University in Brooklyn, New York, and has written several titles for Osprey focusing on the interrelationship between geography, technology, and strategy.

Johnny Shumate works as a freelance illustrator living in Nashville, Tennessee. He began his career in 1987 after graduating from Austin Peay State University. Most of his work is rendered in Adobe Photoshop using a Cintiq monitor. His greatest influences are Angus McBride, Don Troiani, and Édouard Detaille.

"For the modeler, this gives a wonderful glimpse into the uniforms, tactics and campaigns of this era, with well-done illustrations that will assist the figure modeler do a better job of rendering these characters out of history. This is a terrific addition to Osprey's Combat series and is a highly useful to any modeler interested in Ancient History. Highly recommended." - IPMS USA Reviews