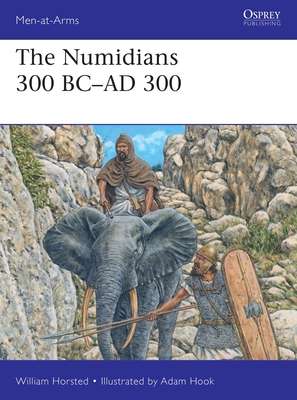 This fascinating study combines the latest archaeological research with an analysis of the available literary and non-literary evidence to examine the organization, equipment, and tactics of the Numidian warriors who fought in conflicts across the ancient Mediterranean as part of the armies of Carthage and Rome between 300 BC and AD 300.

The Numidian light cavalry were among the best-known horsemen in the ancient world: riding without saddles or bridle, carrying only hide shields for defense and clutching a handful of light javelins, they were renowned for their darting attacks, swift retreats, and skirmishing prowess. Yet, as much as they were respected by their allies and enemies, they were unfairly derided for their indiscipline, their perceived lack of culture, and their fecklessness, and dismissed as uncivilized, nomadic barbarians from beyond the fringes of the cultured, settled Mediterranean world. The famous portrayal of Numidian horsemen on Trajan's Column, of barefoot riders in simple tunics, astride tiny ponies, reinforces this view, and is the image that is almost universally reproduced.

Recent scholarship, however, has shown that there is far more evidence for the armour and equipment of the Numidians than hitherto assumed. The carved stone shields and cuirasses that punctuate the decorative friezes of the stone "altars" at Kbor Klib and Chimtou in North Africa are confident representations of Numidian panoplies, not captured Carthaginian armour as has previously been argued. In this book, this research is presented alongside a close examination of various ancient texts which reveals that the Numidians also fielded infantry, slingers, archers, and even war elephants in conflicts across the Mediterranean, including Spain, Greece, northern Italy, and Thrace. All of these troops are brought to life in original colour artwork, complemented by chapters on their weapons and equipment, history, tactics, and organization.

Adam Hook studied graphic design, and began his work as an illustrator in 1983. He specializes in detailed historical reconstructions, and has illustrated Osprey titles on subjects as diverse as the Aztecs, the Ancient Greeks, Roman battle tactics, several 19th-century American subjects, the modern Chinese Army, and a number of books in the Fortress series. His work features in exhibitions and publications throughout the world.