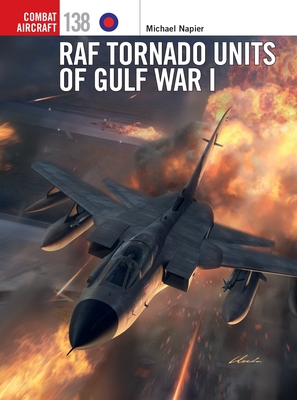 The Panavia Tornado GR 1 and F 3 bore the brunt of RAF operational tasking (and combat losses) during the first Gulf War in 1991. Featuring many first-hand combat accounts, this book tells the story of the backbone of the RAF frontline from the 1980's and 1990's.

When the Gulf Crisis of 1990 was triggered by the Iraqi invasion of Kuwait, the RAF responded by sending Tornado F 3 fighters to Saudi Arabia to help defend the country against further aggression. These aircraft were followed by the deployment of Tornado GR 1 strike/attack aircraft to Bahrain. Eventually three wings of Tornado GR 1s were established in Bahrain, Tabuk, and Dhahran, as well as a detachment of Tornado GR 1A reconnaissance aircraft. At the start of hostilities in January 1991, the Tornado GR 1 wings carried out night-low-level attacks against Iraqi Main Operating Bases using the JP233 runway denial weapon. Meanwhile, Combat Air Patrols from the Tornado F 3 wing ensured the integrity of Saudi airspace.

Once air supremacy had been established, the Tornado GR 1 force moved to medium-level operations, initially by night and later by day, to attack the Iraqi oil production and storage infrastructure. The arrival in theater of a laser designation capability with Pave Spike/Buccaneer and TIALD/Tornado enabled precision attacks against the Iraq transport system to cut off the frontline troops from resupply and reinforcement and then to carry out a systematic destruction of the airfield facilities. Tornado GR 1A reconnaissance operations played a major role in the location of Scud missile launchers and in the planning and execution of the land offensive. Throughout the conflict, the Tornado F 3 wing at Dhahran carried out defensive counter-air operations to ensure the safety of the base areas. This volume, publishing 30 years after the conflict to free Kuwait, provides detailed first-hand accounts of the missions undertaken by the Tornado crews. It is illustrated by photographs taken by aircrew involved in the operation and includes 30 newly commissioned profile artworks and detailed nose art views of the aircraft ranged against Iraq.

Michael Napier joined the RAF in 1978 as a University Cadet and studied Aeronautical Engineering at the Imperial College, London. He qualified as a fast jet pilot in 1985, and his military flying career encompassed both the Cold War and operations over Iraq after the Gulf War. Michael left the RAF in 1997 and joined British Airways, first as a First Officer and later as a Captain.
Michael has written articles for aviation magazines including Aircraft Illustrated, Flypast, Aeroplane Monthly and Cross & Cockade. He is the author of various books published by Osprey including In Cold War Skies, Korean Air War and RAF Tornado Units of Gulf War I in the Osprey Combat Aircraft series. Michael lives near Chipping Norton, Oxfordshire.

Janusz Swiatlon lives in Krakow, Poland. A veteran of service with the Polish Army's 6th Pomorska Dywizja Powietrzno-Desantowa (an airborne unit) in the 1980s, he is both an enthusiast of aviation historian and a military modeller. As an illustrator, he has created numerous colour aircraft profiles published in magazines and books by AF Editores, Kagero, Chevron, Stratus and other publishing houses, including Osprey.

Gareth Hector is a digital artist of international standing as well as an aviation history enthusiast. Gareth completed the battlescene and cover artwork in this title. He lives in Perthshire, UK.