Greece Against Rome: The Fall of the Hellenistic Kingdoms 250-31 BC (Hardcover) 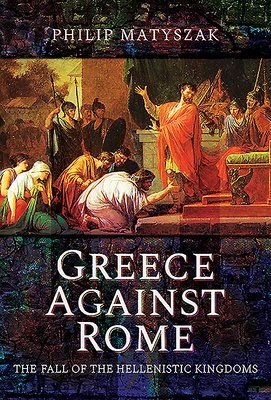 By Philip Matyszak
$32.95
Email or call for price.

Towards the middle of the third century BC, the Hellenistic kingdoms (the fragments of Alexander the Great's short-lived empire) were near their peak. In terms of population, economy and military power each individual kingdom was vastly superior to Rome, not to mention in fields such as medicine, architecture, science, philosophy and literature.

Philip Matyszak relates how, over the next two-and-a half centuries, Rome conquered and took over these kingdoms while adopting so much of Hellenistic culture that the resultant hybrid is known as 'Graeco-Roman'

Refreshingly, the story is largely told from the viewpoint of the Hellenistic kingdoms. At the outset, the Romans are little more than another small state in the barbarian west, and less of a consideration than the Scythians or Jews. Much of the narrative therefore focuses on the 'game of thrones' between the Hellenistic powers, a tale of assassinations, double crosses, dynastic incest and warfare. As the Roman threat grows, however, it belatedly becomes the primary concern of the kingdoms as the legions destroy them one by one.