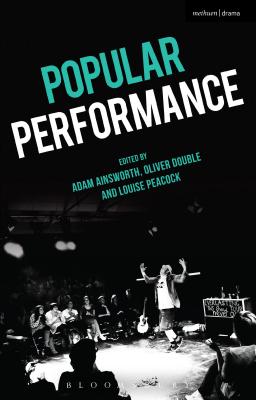 There is no fourth wall in popular performance. The show is firmly rooted in the here and now, and the performers address the audience directly, while the audience answer back with laughter, applause or heckling. Performer and role are interlaced, so that we are left uncertain about just how the persona we see onstage might relate to the private person who presents it to us.

Popular Performance defines and surveys varieties of performance where the main purpose is to entertain, and where there is no shame in being trivial, frivolous or nonsensical as long as people go home happy at the end of the show. Contributions by new and established scholars focus particularly on how it is made, explaining the techniques of performance and production that make it so appealing to audiences. With sections examining how popular performance works in a range of historical and contemporary examples, readers will gain insights into:

Adam Ainsworth is senior lecturer in Drama at Kingston University, London, UK. His research interests include 19th-century pantomime, music hall and variety theatre and he is currently undertaking doctoral research that will produce the first detailed history of the Empire Theatre at Kingston-upon-Thames. He co-convenes the TaPRA Popular Performance Working Group.Oliver Double started his career as a professional comedian before lecturing on and teaching drama and comedy at the University of Kent, UK. He is the author of many journal articles on stand-up comedy and comedians. His publications include Stand Up: On Being A Comedian (2005) and Getting the Joke (2nd edition, 2014).Louise Peacock is assistant professor of theatre practice at the University of Southern California, USA. She is the author of Serious Play: Modern Clown Performance (2009) and Slapstick and Comic Performance: Comedy and Pain (2014). She is a member of the editorial board of Comedy Studies.