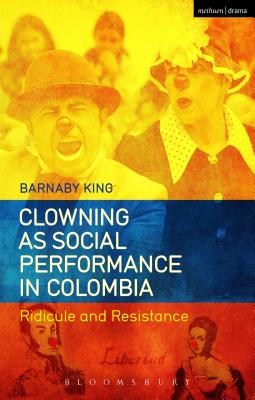 By Barnaby King
Email or call for price.

Contemporary Clowning as Social Performance in Colombia brings to light the emergence of new kinds of clowning in everyday life in Colombia, focusing particularly on the pervasive presence of clowns in the urban landscape of Bogot . In doing so it brings a fresh and updated perspective on what clowning is as well as what it does in the 21st century. Featuring descriptions of more than 24 distinct clown performers, Barnaby King provides an engaging and lively account of the performative moment in which clowning transpires, analyzing the techniques and processes at work in producing what is commonly named as "clowning+?.

In contrast with their North American and European counterparts, clowns in Latin America are seen every day in public settings, are popular cultural figures and sometimes claim to exercise real political influence. Drawing on five years of co-performative ethnography, the book argues that clown artists have thrived by adapting their craft to changing social and economic conditions, in some cases by allying themselves with authority and power, and in others by generating spaces for creativity and resistance in adverse circumstances. By applying performance theory to clowning in a specific cultural context this is the first work to propose an appropriate scholarly response to the diversity and ingenuity of clowning beyond Europe and North America.

Barnaby King is Senior Lecturer at Edge Hill University, Lancashire, UK, where he teaches clowning and physical theatre. With over fifteen years' experience as a professional director and performer, he has toured his solo clown show internationally to critical acclaim, and is also founding artistic director of the Clown Encuentro, an annual festival of clowning in Latin America.