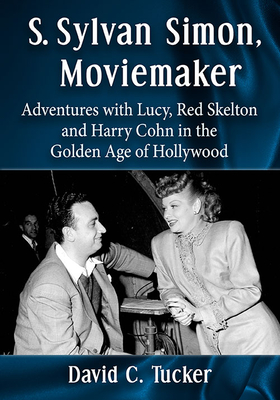 By David C. Tucker
Email or call for price.
Usually Ships in 1-5 Days

He was Red Skelton's favorite director, and mentored Lucille Ball in the art of physical comedy. In his 15-year Hollywood career, S. Sylvan Simon (1910-1951) directed and/or produced more than 40 films, with stars like Lana Turner, Abbott and Costello, and Wallace Beery. Though he loved to make moviegoers laugh, he demonstrated his versatility with murder mysteries, war stories, and musicals. After a decade at MGM, he moved to Columbia, where he produced his own projects, including the Western melodrama Lust for Gold, and popular slapstick comedies like The Fuller Brush Girl. As head of production, reporting to irascible Harry Cohn, he produced the award-winning Born Yesterday, and was working on From Here to Eternity when his life ended tragically at the age of 41. This first-ever account of Simon's life and career draws on interviews with family and colleagues, genealogical records, archival materials, and his own annotated scripts to tell the story of a stage-struck boy from Pittsburgh whose talent and tenacity made him a Hollywood success. The filmography provides production histories, critical commentary, and excerpts from published reviews. An appendix covers books written or edited by Simon, including his anthologized plays for amateur groups.

David C. Tucker is the author of numerous books about classic film and television history. A retired public library administrator, he lives outside Atlanta, Georgia.