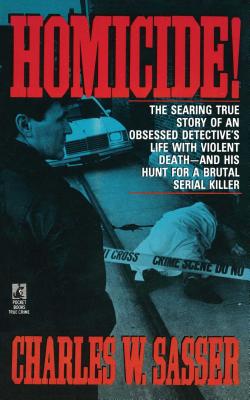 Former Police Homicide Detective Charles W. Sasser brings readers into the raw, grim world of a detective with the stories of the psychopaths and criminals that haunt our streets, the gruesome details of dead bodies, the killers who are out on parole and free to kill again, and the terrible, mind-binding toll homicide investigations take on a cop and his family.

They called Tulsa detective Chuck Sasser “Columbo” for his uncanny ability to solve murders. Now, he shares the most shocking, gory details of his career with readers in the pages of Homicide!

One case possessed Chuck Sasser as no other would. For nine years, he searched for the vicious serial killer who assaulted and murdered three young women. He had few clues, leads, or suspects—but the similar patterns of death and mutilation and the sheer savagery of the crimes drove him relentlessly on…

Through a tough detective’s eyes, HOMICIDE! brings to life the ugly realities, dark humor, and battle-scared idealism of a veteran cop’s world. This is life on the front lines, the real battle against the lawless insanity that is threatening the cities and towns across America.

Charles W. Sasser has been a full-time freelance writer, journalist, and photographer since 1979. He is a veteran of both the U.S. Navy (journalist) and U.S. Army (Special Forces, the Green Berets), a combat veteran, and former combat correspondent wounded in action. He also served fourteen years as a police officer (in Miami, Florida, and in Tulsa, Oklahoma, where he was a homicide detective). He is author, co-author, or contributing author of more than thirty books and novels, including One Shot-One Kill and Hill 488. Sasser now lives on a ranch in Chouteau, Oklahoma, with his wife Donna.