Fear in Our Hearts: What Islamophobia Tells Us about America (North American Religions #5) (Hardcover) 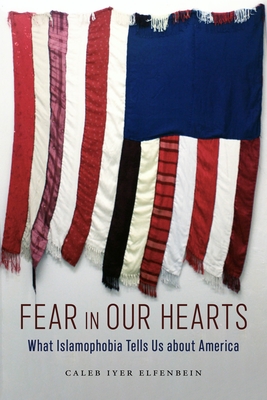 In a 2018 national poll, over ninety percent of respondents reported that treating people equally is an essential American value. Almost eighty percent said accepting people of different racial backgrounds is very important. Yet about half of the general public reported that they doubt whether Muslims can truly dedicate themselves to American values and society. Why do many people who say they believe in equality and acceptance of those of different backgrounds also think that Muslims could be an exception to that rule? In Fear in Our Hearts, Caleb Iyer Elfenbein examines Islamophobia in the United States, positing that rather than simply being an outcome of the 9/11 attacks, anti-Muslim activity grows out of a fear of difference that has always characterized US public life. Elfenbein examines the effects of this fear on American Muslims, as well as describing how it works to shape and distort American society. Drawing on over 1,800 news reports documenting anti-Muslim activity, Elfenbein pinpoints trends, draws connections to the broader histories of immigration, identity, belonging, and citizenship in the US, and examines how Muslim communities have responded. In the face of public fear and hate, American Muslim communities have sought to develop connections with non-Muslims through unprecedented levels of community transparency, outreach, and public engagement efforts. Despite the hostile environment that has made these efforts necessary, American Muslims have faced down their own fears to offer a model for building communities and creating more welcoming conditions of public life for everyone. Arguing that anti-Muslim activity tells us as much about the state of core American values in general as it does about the particular experiences of American Muslims, this compelling look at Muslims in America offers practical ideas about how we can create a more welcoming public life for all in our everyday lives.

Caleb Iyer Elfenbein is Associate Professor in the Departments of History and Religious Studies at Grinnell College, where he is also Director of the Center for the Humanities.