One Little Spark!: Mickey's Ten Commandments and The Road to Imagineering (Hardcover) 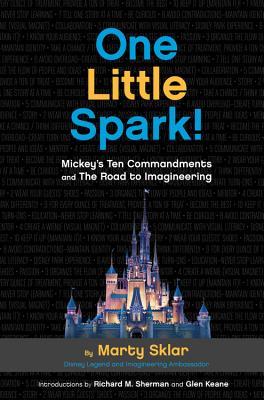 We’ve all read about the experts: the artists, the scientists, the engineers—that special group of people known as Imagineers for The Walt Disney Company. But who are they? How did they join the team? What is it like to spend a day in their shoes?

Disney Legend Marty Sklar wants to give back to fans and answer these burning questions. When Marty was president of Walt Disney Imagineering, he created a list of principles and ideals for the team, aptly named Mickey’s Ten Commandments. Using this code of standards as his organizational flow, Marty provides readers with insights and advice from himself and dozens of hands-on Imagineers from around the globe. It’s a true insider’s look like no other!
Searching for that perfect gift for the #1 Disney fan in your life? Explore more behind-the-scenes stories from Disney Editions:

Marty Sklar was a student at UCLA and editor of its Daily Bruin newspaper in 1955 when he was recruited to create an 1890s-themed newspaper, The DisneylandNews, a month before the theme park opened. After graduating, he joined Disneyland full-time in 1956, where he held responsibility for most of the park’s publicity and marketing materials.
In 1961, he moved to WED Enterprises, renamed in 1986 to Walt Disney Imagineering, where he worked on attractions for the 1964 New York World's Fair. For nearly ten years, he wrote personal materials for Walt Disney for use in publications, television and special films. In 1974 he became vice president of concepts/planning, and guided the creative development of EPCOT.

". . . a must-read, especially if you are traveling to a Disney Park this summer."—<strong><em>Huffington Post</em></strong>

PRAISE FOR TRAVELS WITH FIGMENT: ON THE ROAD IN SEARCH OF DISNEY DREAMS

PRAISE FOR TRAVELS WITH FIGMENT: ON THE ROAD IN SEARCH OF DISNEY DREAMS

PRAISE FOR ONE LITTLE SPARK!"In the process of writing the book, Sklar asked 75 current and former Disney Imagineers to write him short stories about how projects worked or didn’t work. He also enlisted them to talk about how they became Imagineers, which forms the basis of the second part of the book. Some of the Imagineers are known by many Disney fans, while others are less so, which reinforces another recurring theme: 'The achievement of the Imagineers are not those of brilliant individuals acting alone—it’s all about the perfect blending of talents. In a word, it’s teamwork,' [Sklar said]."—<strong><em>Orange County Register</em></strong>

PRAISE FOR ONE LITTLE SPARK!"What does it take to break into the theme park design business? If we kept a list of frequently asked questions on Theme Park Insider, that one would rank high upon it. Young theme park fans (and even some not-so-young-ones) often dream about turning their love for theme parks into a career designing them. But answering this question proves difficult, for the people who create parks took an almost countless number of paths to those jobs. . . . Disney Legend Marty Sklar includes comments and advice from 75 current and former Disney Imagineers who share their experiences on that road. It's like reading a Disney geek's dream discussion thread. . . . One Little Spark reads best as a companion to Sklar's earlier book. This isn't a biography, but a master class in theme park design."—<strong><em>Theme Park Insider</em></strong>