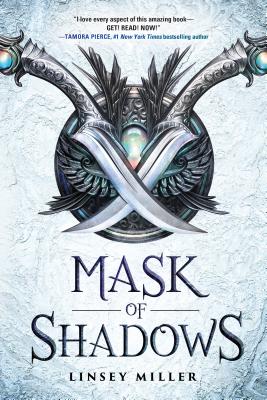 This is book number 1 in the Mask of Shadows series.

Many years ago, during war between two kingdoms, a country called Nacea was destroyed when the troops protecting the land abandoned them to the “shadows”—monsters that kill in gruesome ways. As far as Sal knows, she is the only Nacean to escape the massacre & she wants revenge. Then Sal discovers a poster pronouncing the auditions for Opal, one of the “Queen’s left hands,” her personal group of four assassins. Sal jumps at the chance to reach her goal: kill the ones responsible for her people’s death. However, the auditions certainly are not to be fun & games. In fact, they don’t end until the Queen chooses the remaining top three or…until there is one person left alive. Unknown to Sal, not al of the lords & ladies who surrendered are happy with the way the war went. As dissatisfaction grows, a plan is set in motion & soon becomes clear that things are about to change. This YA fantasy has plenty of action with a hint of romance to carry you from page to page.

Sallot Leon is a thief, and a good one at that. But gender fluid Sal wants nothing more than to escape the drudgery of life as a highway robber and get closer to the upper-class--and the nobles who destroyed their home.

When Sal steals a flyer for an audition to become a member of The Left Hand--the Queen's personal assassins, named after the rings she wears--Sal jumps at the chance to infiltrate the court and get revenge.

But the audition is a fight to the death filled with clever circus acrobats, lethal apothecaries, and vicious ex-soldiers. A childhood as a common criminal hardly prepared Sal for the trials. And as Sal succeeds in the competition, and wins the heart of Elise, an intriguing scribe at court, they start to dream of a new life and a different future, but one that Sal can have only if they survive.

This heart-pounding YA story of magic, danger, and revenge is perfect for readers looking for:

Praise for Mask of Shadows:

A Bustle Most Anticipated YA of 2017

"An intriguing world and a fantastically compelling main character make for a can't-miss debut. Miller's Mask of Shadows will make you glad you're not an assassin--and even gladder Sal is."--Kiersten White, New York Times bestselling author of And I Darken and Now I Rise

"It is fabulous. Go forth and read the Hunger Games-like craftiness and intensity, Kaz Brekker-ish determination and moral questionability, and utterly charming romance." -- LGBTQ Reads

"Uber bloody and action packed, Mask of Shadows is the book for anyone who loves a heavy dose of grit and gore with their fantasy." -- TeenVogue.com