Before I Let Go (Paperback) 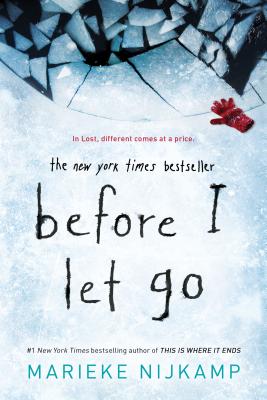 Corey has moved from Lost Creek, Alaska, leaving the only life she ever knew. She also leaves her best friend Kyra behind. The two miss each other immensely, & finally just days before Corey is destined to return home, Kyra dies. Grief stricken, Corey immediately returns to Lost Creek only find it has changed. She can’t get a straight answer from anyone about Kyra’s death, & even worse, she’s viewed as an outsider. Corey has six days to make things right & find the truth behind Kyra’s death. But if she isn’t careful she might end up joining Kyra.

From #1 New York Times bestselling author Marieke Nijkamp (This Is Where It Ends) comes Before I Let Go, an emotional thriller about a suspicious death, a friend desperate for answers, and their small town's sinister secrets.

Best friends Corey and Kyra were inseparable in their tiny snow-covered town of Lost Creek, Alaska. But as Kyra starts to struggle with her bipolar disorder, Corey's family moves away. Worried about what might happen in her absence, Corey makes Kyra promise that she'll stay strong during the long, dark winter.

Then, just days before Corey is to visit, Kyra dies. Corey is devastated--and confused, because Kyra said she wouldn't hurt herself. The entire Lost community speaks in hushed tones, saying Kyra's death was meant to be. And they push Corey away like she's a stranger.

The further Corey investigates--and the more questions she asks--the greater her suspicion grows. Lost is keeping secrets--chilling secrets. Can she piece together the truth about Kyra's death and survive her visit?

Perfect for readers looking for:

Praise for Before I Let Go:
A New York Times Bestseller
2019 ALA Rainbow List
2018 Teen Choice Book of the Year Nominee
"With exceptional handling of everything from mental illness to guilt and a riveting, magic realist narrative, this well wrought, haunting novel will stick with readers long after the final page."--Booklist *STARRED REVIEW*
"Compulsive readability... Intriguingly spooky"--Kirkus Reviews
"This sophomore novel from Nijkamp will haunt readers... The honest reflection of mental illness, suicide, friendship, and being an outsider provides ample topics for book discussion."--School Library Journal
" A] reflective examination on love and returning home... Nijkamp has an uncommon talent for drawing readers deep into the psyches of her characters."--Publishers Weekly

Also by Marieke Nijkamp:
This Is Where It Ends
Even If We Break