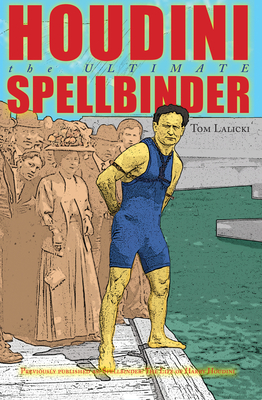 Originally published as: SPELLBINDER: The Life of Harry Houdini. He was born Ehrich Weiss but, at an early age, he chose another name for himself. He wanted a name to suit his career of magic and entertainment and he chose a name that paid homage to one of the legendary magicians of all time: Robert Houdin. His illusions and escapes were more astonishing and more challenging than anyone had ever done before and he eclipsed the names of all other magicians as his fame reached around the world, made him famous and made him the most famous illusionist ever. Houdini disappeared through brick walls. He escaped from straitjackets and then straitjackets immersed in water. He performed escapes in public places and from jail cells in major cities--and the crowds flocked to his performances. Tom Lalicki tells Houdini's story with a fascinating mix of text and images, revealing the facts and juxtaposing them with startling images of a master entertainer performing masterfully and mysteriously, mesmerizing his audiences and mystifying experts with his skill and his invention.

Enjoyed equally by adults and kids, Houdini: The Ultimate Spellbinder plunged Tom Lalicki so deeply into Houdiniana that he followed up the award-winning biography with three Houdini & Nate crime novels. They are Danger in the Dark, Shots at Seas, and Frame-Up on the Bowery, also available as ebooks. A real-life Bruce Wayne, Houdini was the first American superhero. The world's greatest entertainer was a secretive philanthropist who used his nearly supernatural physical and mental powers to unmask villainy and capture criminals.