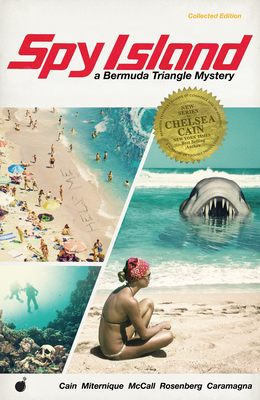 The new graphic novel from the team behind bestseller Man-Eaters is a terrifying, sexy, and thought-provoking espionage thriller-that also happens to be laugh-out-loud funny!

The world's best spies keep watch over the Bermuda Triangle from a mysterious island outpost teeming with supernatural intrigue, monsters, and evil villains set on global domination. The best of these spies is named Nora Freud (no relation). She knows eighty-seven ways to kill someone with a cocktail toothpick, and she's used thirty-two of them. Lately though, Nora has started to feel like she's going through the motions. Close the temporal portal. Assassinate the genocidal maniac. Have sex with the MI-6 agent. Plus, the island has gotten kind of touristy. She agrees to one last mission. But when Nora's troubled marine cryptozoologist sister shows up unexpectedly, warning of mermaid attacks, Nora realizes that boredom is not her biggest problem.

*Sponsored by the Bermuda Triangle Chamber of Commerce.

Spy Island was created by NYT best-selling author, Chelsea Cain, writer of the Archie Sheridan/Gretchen Lowell thrillers, as well as One Kick, which was adapted for television starring Chris Noth. Her previous comics include Man-Eaters (Image) and Mockingbird (Marvel), both nominated for Eisner Awards.

Chelsea Cain is the author of The New York Times bestselling thrillers HEARTSICK, SWEETHEART, EVIL AT HEART, THE NIGHT SEASON, and KILL YOU TWICE. Her Portland-based thrillers, described by The New York Times as "steamy and perverse," have been published in over 25 languages, recommended on "The Today Show," appeared in episodes of HBO's "True Blood" and ABC's "Castle," named among Stephen King's top ten favorite books of the year, and included in NPR's list of the top 100 thrillers ever written. According to Booklist, "Popular entertainment just doesn't get much better than this."