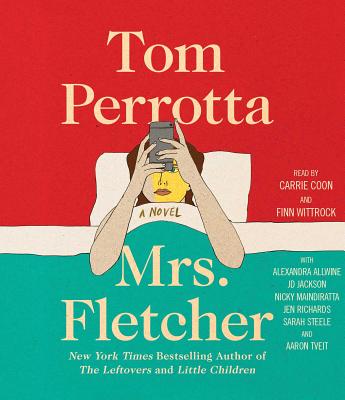 “With son Brendan off to college at Berkshire State and ex-husband Ted remarried, Eve Fletcher is feeling a bit unfulfilled, despite her sometimes-trying job as the director of a senior center - until she finds a new and decidedly adult pastime. Neither mother nor son knows what to make of their new lives, and all they know about relationships, to say nothing of sex, seems to be up for discussion. What I love about Tom Perrotta's books is how uncomfortable they can make me feel, while at the same time making me laugh hysterically; Mrs. Fletcher shows Mr. Perrotta in top form on both counts.”
— Daniel Goldin, Boswell Book Company, Milwaukee, WI

“Light, zingy, and laugh-out-loud funny” (People), the New York Times bestselling novel about sex, love, and identity as seen through the eyes of a middle-aged woman and her college freshman son.

Meanwhile, miles away at the state college, Eve’s son Brendan—a jock and aspiring frat boy—discovers that his new campus isn’t nearly as welcoming to his hard-partying lifestyle as he had imagined. Only a few weeks into his freshman year, Brendan is floundering in a college environment that challenges his white-dude privilege and shames him for his outmoded, chauvinistic ideas of sex. As the New England autumn turns cold, both mother and son find themselves enmeshed in morally fraught situations that come to a head on one fateful November night.

“The sweetest and most charming novel about pornography addiction and the harrowing issues of sexual consent that you will probably ever read” (The New York Times Book Review), Mrs. Fletcher is a timeless examination of sexuality, identity, parenthood, and the big clarifying mistakes people can make when they’re no longer sure of who they are or where they belong. “Tom Perrotta’s latest might just be his best” (NPR).

Tom Perrotta is the bestselling author of eight works of fiction, including Election and Little Children, both of which were made into critically acclaimed movies, and The Leftovers, which was adapted into an HBO series. He lives outside Boston.