Port Elgin's War: A History of a Canadian Town and the 98th (Bruce) Anti-tank Battery during the Second World War (Paperback) 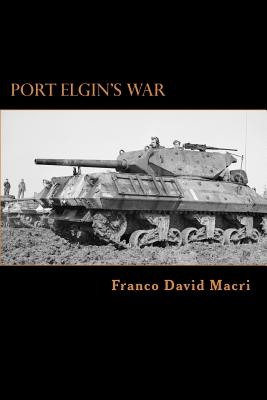 During the Second World War Canada evolved with the currents of the modern age, developing both technologically and industrially to become an Allied partner in the war against the Axis powers. This process can be seen, in part, by exploring the history of Port Elgin, Ontario, a small town situated northwest of Toronto on Lake Huron's shore. Geopolitically, Canadians shed their reliance on Britain for security as closer ties were forged with the United States. As a snapshot of Canadian society, Port Elgin's War explores how a small community in Bruce County adapted to this crisis, while providing clues about the decline of British influence in North America. It also suggests ways in which US-Canadian relations were strengthened. Port Elgin's War examines how attitudes were affected by war, and how people's actions impacted Canada's efforts. One of the leading organizations shaping public opinion during this period was Rotary International. A number of individuals from the Port Elgin area joined the Royal Canadian Air Force (RCAF). During the interwar period aviation captured many people's imagination, and following the outbreak of hostilities the town's volunteers fought in the skies above Europe and the Mediterranean. Their experiences made the technology of flight seem more accessible than was previously thought possible. The proximity of British Commonwealth Air Training Plan (BCATP) airfields in neighboring Huron County also brought many international airmen to the town along with new cultural and political influences. It was, however, the 98th Bruce Anti-tank Battery of the Royal Canadian Artillery (RCA), with its M-10 self-propelled AT guns (SPs or Wolverines), that became Port Elgin's primary military contribution to the Allied cause. As part of the 5th Canadian Armoured Division, the battles in which it participated include the crossing of the Melfa River (in the Liri Valley - near Monte Cassino and Anzio), the breaking of the Gothic Line, and the advance through the eastern Romagna. Subsequent operations in Northwest Europe completed the battery's journey. Anti-tank warfare has generally not received a great deal of attention in much of the existing historiography, but Port Elgin's War provides analysis on the development and application of Canadian antitank doctrine and tactics. Although the 98th Anti-tank Battery was a small unit, its impact on the course of several engagements during the Italian campaign was significant. Port Elgin's War illustrates why this was so. This book will be useful to readers wishing to learn more about Canada's involvement in World War II, as well as for those seeking information on combined arms warfare, armoured warfare, and self-propelled artillery at the tactical level.

David Macri is an historian at St. John's College in Hong Kong.