Smart Brevity: The Power of Saying More with Less (Hardcover) 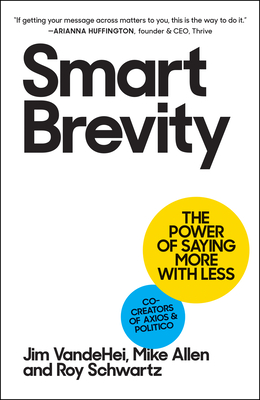 Brevity is confidence. Length is fear. This is the guiding principle of Smart Brevity, a communication formula built by Axios journalists to prioritize essential news and information, explain its impact and deliver it in a concise and visual format. Now, the co-founders of Axios have created an essential guide for communicating effectively and efficiently using Smart Brevity—think Strunk and White’s Elements of Style for the digital age.

In SMART BREVITY: The Power of Saying More with Less, Axios co-founders Jim VandeHei, Mike Allen, and Roy Schwartz teach readers how to say more with less in virtually any format. They also share communications lessons learned from their decades of experience in media, business and communications.

Jim VandeHei is the co-founder, CEO and Chairman of Axios, a media company focused on breaking news and invaluable insights across business, politics, technology and the world. Axios helps readers and viewers get smarter, faster across the consequential topics reshaping our country and lives. As CEO, VandeHei has steered Axios into becoming one of the most celebrated digital media success stories of the past decade. VandeHei is also an executive producer of the Emmy Award-winning docu-news series, “Axios on HBO.”

Before Axios, VandeHei co-founded and was CEO of Politico, the media company that upended and revolutionized political and policy journalism in Washington, New York, and Europe. Overseeing both the editorial and business teams, VandeHei was the leading strategist behind its highly scalable and successful business model. Prior to this, VandeHei spent more than a decade as a reporter, covering the Presidency and Congress for The Wall Street Journal and The Washington Post. He was named national Editor of the Year in 2016.

VandeHei is from Oshkosh, Wisconsin. He has a bachelor's degree from the University of Wisconsin-Oshkosh.


Mike Allen is a co-founder of Axios, a news and information platform focusing on business, tech, politics and other topics shaping the future.

Mike is responsible for Axios editorial coverage, and writes the flagship daily newsletters, Axios AM and Axios PM.

Mike was a co-founder of Politico, where he created the Playbook franchise and helped build the company for its first decade. He has been named several times to Vanity Fair's “New Establishment” list.

He is also an alumnus of TIME, The New York Times, The Washington Post, the Richmond Times-Dispatch and The (Fredericksburg, Va.) Free Lance-Star.

Allen is from Orange County, Calif., and graduated from Washington and Lee University.

Roy Schwartz is the co-founder and President of Axios, a media company focused on breaking news and invaluable insights across business, politics, technology and the world. Axios helps readers and viewers get smarter, faster across the consequential topics reshaping our country and lives. As President, Schwartz has led Axios through multiple fundraising rounds, overseen all company strategy and business operations and most recently launched Axios HQ, an internal communications software platform to help teams communicate more effectively. Schwartz also serves as executive producer of the Emmy Award-winning docu-news series “Axios on HBO.”

Under his leadership, Axios was listed as one of Fast Company’s “World’s Most Innovative Companies 2018” and announced as Washington Business Journal’s “2021 Fastest Growing Companies.” Schwartz has been named as one of DCInno's 2016 "50 on Fire" for marketing and advertising, and as 2015 FOLIO 100 “Corporate Catalyst.”

Schwartz is the former chief revenue officer for POLITICO. Prior to POLITICO, he was a Partner at Gallup’s management consulting practice in Washington, DC and California advising Fortune 500 companies on employee and customer engagement.

Schwartz was born in Israel and grew up in England. He has a bachelor's degree and M.B.A. from the University of Maryland.

“Smart... [it offers] ways to communicate in a short-attention-span world."
—The New York Times' DealBook

"A slick, engaging and…laudable effort to help communicators reach through the verbal haze and grab readers by the lapels."
—The Wall Street Journal

“The writing of Smart Brevity is refreshingly taut and punchy; most of the sentences are finely crafted, short, and to the point, and rip across the page.”
—The New Republic