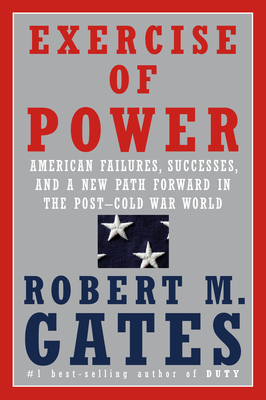 From the former secretary of defense and author of the acclaimed #1 best-selling memoir, Duty, a candid, sweeping examination of power in all its manifestations, and how it has been exercised, for good and bad, by American presidents in the post-Cold War world.

Since the end of the Cold War, the global perception of the United States has progressively morphed from dominant international leader to disorganized entity, seemingly unwilling to accept the mantle of leadership or unable to govern itself effectively. Robert Gates argues that this transformation is the result of the failure of political leaders to understand the complexity of American power, its expansiveness, and its limitations. He makes clear that the successful exercise of power is not limited to the use of military might or the ability to coerce or demand submission, but must encompass as well diplomacy, economics, strategic communications, development assistance, intelligence, technology, ideology, and cyber. By analyzing specific challenges faced by the American government in the post-Cold War period--Iran, Iraq, Afghanistan, North Korea, Syria, Libya, Russia, China, and others--Gates deconstructs the ways in which leaders have used the instruments of power available to them. With forthright judgments of the performance of past presidents and their senior-most advisers, firsthand knowledge, and insider stories, Gates argues that U.S. national security in the future will require learning, and abiding by, the lessons of the past, and re-creating those capabilities that the misuse of power has cost the nation.

ROBERT M. GATES is the author of Duty, and A Passion for Leadership. He served as secretary of defense under presidents George W. Bush and Barack Obama. He was an officer in the United States Air Force and worked for the CIA before being appointed director of the agency. A member of the National Security Council staff in four administrations, he served eight presidents of both political parties. He was president of Texas A&M University from 2002 to 2006, is currently chancellor of the College of William & Mary, was national president of the Boy Scouts of America from 2014 to 2016, and has served on several corporate boards of directors. In 2018 he became chairman of Eisenhower Fellowships. He lives in Washington state.

"[Gates's] tone is judicious and nonpartisan, and he grades all the administrations fairly according to his standards of professional competence. . . The familiar stories gain new life and interest when told by somebody who’s been in the room where it happens. Gates says what he thinks and refuses to pull his punches and, as a result, the book offers in one volume the most accurate record available of recent American security policy, the most incisive critique of that policy and the most sensible guide to what should come next."—Gideon Rose, The New York Times Book Review

"Few Americans have the depth and breadth of hands-on national security experience that Gates has. . . He skillfully blends the knowledge and discipline of a scholar with the hard-earned experience of a practitioner to produce a well-organized and superbly written book to lead America forward into a very different and challenging new world, and it is here that Gates’s admonitions are most compelling."—Richard Moe, The Washington Post

"While the book certainly offers the former defense chief’s insights from being 'in the room,' I was most impressed by his thoughtfulness and clarity when it comes to the imperative for strengthening America’s civilian toolkit. It’s an impressive message for a former defense secretary of both Republican and Democratic administrations to make the first chapter of his book a clarion call on the failure to invest in our nation’s civilian national security tools."—Liz Schrayer, President & CEO, U.S. Global Leadership Coalition

"Accessible. . . This important work dives deep into the past three decades of American foreign policy to provide a realistic picture of how key policy decisions were crafted. Highly recommended for those wanting an examination of America’s role within the global community."—Jacob Sherman, Library Journal, starred review

"An incisive treatise. . . [Gates is] both a sharp critic of Washington D.C.'s policy-making bureaucracies and a shrewd analyst of the dilemmas they wrestle with. The result is a judicious yet bracingly contrarian take on military and foreign policy from the ultimate insider."—Publishers Weekly

"Recent political leaders, Gates holds, have failed to understand and project American power properly. . . It's refreshing to see a secretary of defense call for the use of the military as a choice of last resort."—Kirkus

"Powerful . . . timely. . . Everything [Gates has] consistently advocated – moderation of ambition; realistic expectations; recognition of the limitation of our military power; a desire for sensible long-term engagement – is on display in this volume as a cautionary tale. . . We are far from becoming a defeated or a declining power – but without the prescription that Secretary Gates lays out in Exerciser of Power, we might become one."—Admiral James Stavridis, author of Sailing True North

“In a time of global instability, perhaps our nation’s most distinguished public servant, Robert M. Gates, has given us a compelling, thought-provoking, and much-needed assessment of how we got here—and what must be done to restore and extend the best of American power.”—Jon Meacham, author of The Soul of America

"The mastery with which Robert Gates wrestles with the fundamental question of the purposes to which America’s global power should be used reveals an astonishing combination of strengths — a narrative gift that captivates the reader from start to finish, an insightful mind, and a profound wisdom that comes from his own experience and wide-ranging historical knowledge.”—Doris Kearns Goodwin, author of Leadership

“Exercise of Power is a timely, essential guide for all those committed to sustaining America’s experiment in democracy. It should also be required reading for anyone engaged in crafting, influencing and (especially) executing American foreign policy. It is truly a page-turner.”—General Jim Mattis, coauthor, Call Sign Chaos