Rome and Parthia: Empires at War: Ventidius, Antony and the Second Romano-Parthian War, 40-20 BC (Hardcover) 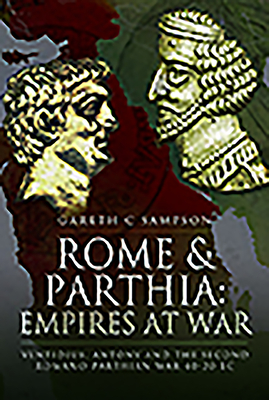 Rome and Parthia explains the motives behind Marc Antony's invasion of Parthia and all the reasons it ultimately failed.

In the mid-first century BC, despite its military victories elsewhere, the Roman Empire faced a rival power in the east; the Parthian Empire. The first war between two superpowers of the ancient world had resulted in the total defeat of Rome and the death of Marcus Crassus. When Rome collapsed into Civil War in the 40s BC, the Parthians took the opportunity to invade and conquer the Middle East and drive Rome back into Europe. What followed was two decades of war which saw victories and defeats on both sides. The Romans were finally able to gain a victory over the Parthians thanks to the great, but now neglected, general Publius Ventidius. These victories acted as a springboard for Marc Antony's plans to conquer the Parthian Empire, which ended in ignominious defeat. Gareth Sampson analyses the military campaigns and the various battles between the two superpowers of the ancient world and the war which defined the shape and division of the Middle East for the next 650 years.