Armies of the Thracians and Dacians, 500 BC to Ad 150: History, Organization and Equipment (Hardcover) 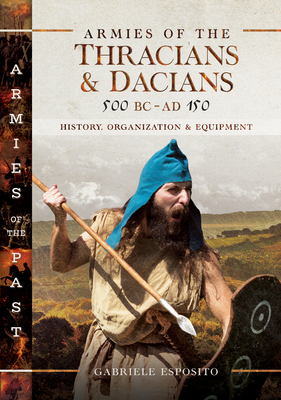 By Gabriele Esposito
$42.95
Email or call for price.

Contains 80 detailed photographs and illustrations of equipment used by these warring armies who dominated the ancient world.

The Thracians are mentioned as early as in the epic poems by Homer and were fundamental in the evolution of the Greek military systems across the ages. They fought in the Persian Wars, were part of Alexander the Great's army, were used as mercenaries in many Hellenistic armies and resisted Roman conquest for a long time. In addition, they used some iconic weapons and had a distincitve panoply.

The Dacians were a mix of different cultures and were extremely influenced by some steppe peoples like the Sarmatians. They had a lot in common with the Thracians but had a different history. They formed one of the largest and most powerful kingdoms of Antiquity, a sort of super-power that dominated over the Balkans. Their wars against Trajan and the Roman Army were absolutely epic, the last campaigns of conquest in the history of the Western Roman Empire.

The book contains a rich collection of photos specifically made for it by some excellent groups of reenactors.