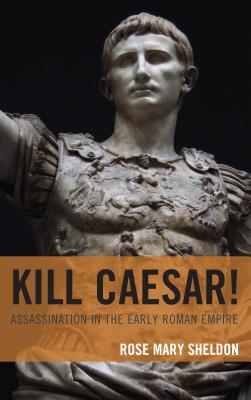 By Rose Mary Sheldon
Email or call for price.

Exploring the history of internal security under the first Roman dynasty, this groundbreaking book answers the enduring question: If there were 9,000 men guarding the emperor, how were three-quarters of Rome's leaders assassinated? Rose Mary Sheldon traces the evolution of internal security mechanisms under the Julio-Claudians, evaluating the system that Augustus first developed to protect the imperial family and the stability of his dynasty. Yet in spite of the intensive precautions taken, there were multiple attempts on his life. Like all emperors, Augustus had a number of competing constituencies-the senate, the army, his extended family, the provincials, and the populace of Rome-but were they all equally threatening? Indeed, the biggest threat would come from those closest to the emperor-his family and the aristocracy. Even Roman imperial women were deeply involved in instigating regime change. By the fourth emperor, Caligula, the Praetorian Guards were already participating in assassinations, and the army too was becoming more politicized. Sheldon weighs the accuracy of ancient sources: Does the image of the emperor presented to us represent reality or what the people who killed him wanted us to think? Were Caligula and Nero really crazy, or did senatorial historians portray them that way to justify their murder? Was Claudius really the fool found drooling behind a curtain and made emperor, or was he in on the plot from the beginning? These and other fascinating questions are answered as Sheldon concludes that the repeated problem of "killing Caesar" reflected the empire's larger dynamics and turmoil.

Colonel Rose Mary Sheldon holds the Henry King Burgwyn, Jr., Chair in Military History at the Virginia Military Institute. Her books include Ambush! Surprise Attack in Ancient Greek Warfare, Rome's Wars in Parthia: Blood in the Sand, Spies of the Bible, and Intelligence Activities in Ancient Rome: Trust in the Gods, but Verify.