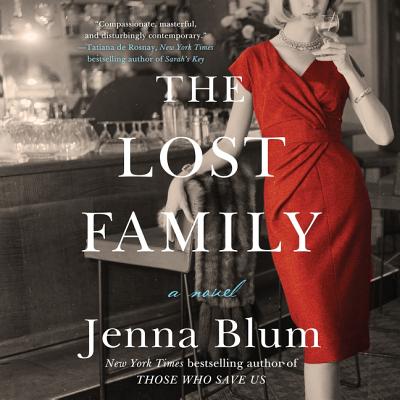 Although WWII officially ended in 1945, for many, the war stayed with them for the rest of their lives and impacted those surrounding them. The Lost Family does an outstanding job at showing the carried grief of the atrocities committed during WWII. From the very first to the very last page I was captivated by Blum’s characters, narratives, and plot. This book is a must-read for historical fiction, romance, and realistic fiction lovers!!

What a page-turner!  Following Peter Rashkin as he tries to survive life after "surviving" the Holocaust and coping with the loss of his wife and two daughters and managing to find "love" once again. What I loved most about this book was that I could relate to the characters and each one reminded me not only of myself but of my own family members. A must-read for historical fiction lovers.

“The characters in Jenna Blum’s The Lost Family are deeply real and unforgettable: a man and a woman both trying to compensate for the losses of their previous families by creating a new family, and the daughter who grows up with them, feeling equally lost. Blum gets so many things effortlessly right: the terror of Nazi Germany; the fluctuating zeitgeist of New York in the 1960s, ’70s, and ’80s; the way the foodie father, the dieting wife, and the eating-disordered daughter all express themselves through their relationship with food. I would recommend it for Meg Wolitzer fans, though Blum’s style is definitely her own.  ”
— Nina Barrett, Bookends & Beginnings, Evanston, IL

The New York Times bestselling author of Those Who Save Us creates a vivid portrait of marriage, family, and the haunting grief of World War II in this emotionally charged, beautifully rendered story that spans a generation, from the 1960s to the 1980s.

In 1965 Manhattan, patrons flock to Masha's to savor its brisket bourguignon and impeccable service and to admire its dashing owner and head chef Peter Rashkin. With his movie-star good looks and tragic past, Peter, a survivor of Auschwitz, is the most eligible bachelor in town. But Peter does not care for the parade of eligible women who come to the restaurant hoping to catch his eye. He has resigned himself to a solitary life. Running Masha's consumes him, as does his terrible guilt over surviving the horrors of the Nazi death camp while his wife, Masha--the restaurant's namesake--and two young daughters perished.

Then exquisitely beautiful June Bouquet, an up-and-coming young model, appears at the restaurant, piercing Peter's guard. Though she is twenty years his junior, the two begin a passionate, whirlwind courtship. When June unexpectedly becomes pregnant, Peter proposes, believing that beginning a new family with the woman he loves will allow him to let go of the horror of the past. But over the next twenty years, the indelible sadness of those memories will overshadow Peter, June, and their daughter Elsbeth, transforming them in shocking, heartbreaking, and unexpected ways.

Jenna Blum artfully brings to the page a husband devastated by a grief he cannot name, a frustrated wife struggling to compete with a ghost she cannot banish, and a daughter sensitive to the pain of both her own family and another lost before she was born. Spanning three cinematic decades, The Lost Family is a charming, funny, and elegantly bittersweet study of the repercussions of loss and love.