Fire in the Star (The Unicorn Quest) (Paperback) 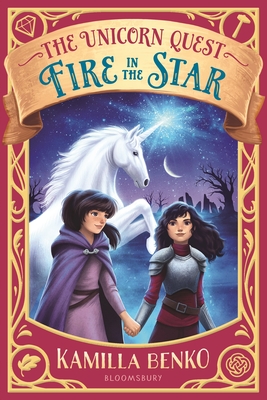 Sometimes when I finish a novel, I don’t want to pick up another. I want to let that story simmer. And this is a perfect example! With the end of book three comes the end of wondrous trilogy. But oh, what a marvelous ending to a finely spun tale. Benko kept building and building the suspense; I thought the book was going to explode out of my hands! I love Claire and Sophie; their relationship is so authentic and so is their journey.

The enchanting Unicorn Quest series reaches its thrilling conclusion as two sisters fight to save a magical land from destruction.

* "Those who love Madeleine L'Engle's A Wrinkle in Time . . . [or] Neil Gaiman's Coraline, can't miss this debut.” - Booklist, starred review, on The Unicorn Quest

After a lifetime of being the younger sister--of letting Sophie fight her battles, of following her on countless Experiences and through a fireplace into a magical land--it's finally Claire Martinson's turn to lead. And she'll do anything to keep her big sister safe: resist the wraiths' cold shadows, experiment with new and dangerous magic, become a thief in disguise.

When Claire discovers that "only a queen can defeat a queen," she knows she must steal and reforge the ancient Crown of Arden to stand a chance against the darkness that threatens the world and her family. Because Queen Estelle d'Astora, desperate to reclaim her power, will stop at nothing to gain the support of the four guilds--even if it means killing the last unicorn. Claire will need every friend she's made to help her as the fate of Arden hangs in the balance . . . But the secrets of the unicorns are deeper than anyone could have ever imagined. Does Claire have what it takes to ignite the long-buried magic of this world and wake the fire in the stars? Or will the true salvation of Arden rest on one final and heartbreaking sacrifice?

Kamilla Benko spent most of her childhood climbing into wardrobes, trying to step through mirrors, and plotting to run away to an art museum. Now, she visits other worlds as a children's book author. In addition to the Unicorn Quest trilogy, she is the author of the original Frozen novel that bridges the events of Disney's massively successful animated movie and its upcoming sequel. She currently lives in New York with her bookshelves, teapot, and hiking boots.
www.kamillabenko.com
@kkbenko (Twitter)

“Picking up in the midst of danger that never withdraws, this continuation dives deeper into the mysterious legends that make Arden magical.” —Kirkus Reviews on SECRET IN THE STONE

“Hand this series to any fantasy adventure lover.” —Booklist on SECRET IN THE STONE

“Fans of magic and fantasy, especially those who love Madeleine L'Engle's A Wrinkle in Time . . . [or] Neil Gaiman's Coraline, can't miss this debut.” —Booklist, starred review, on THE UNICORN QUEST

“Hand to readers who love Narnia.” —School Library Journal on THE UNICORN QUEST

“Rich worldbuilding and high stakes make this a quest worth taking with a protagonist who grows by facing her fears.” —Kirkus Reviews on THE UNICORN QUEST

“Enter and be transported to a lush land full of intrigue, danger, and thrilling magic! Benko's sharp storytelling will keep readers madly flipping the pages in this new, timeless adventure. Spectacular!” —Jennifer Lynn Alvarez, author of The Guardian Herd and Riders of the Realm series on THE UNICORN QUEST

“An adventure-quest brimming with magic and heart. Benko reaches the child in all of us who secretly hopes that a door is never just a door. Mesmerizing.” —Roshani Chokshi, New York Times bestselling author on THE UNICORN QUEST

“The Unicorn Quest draws you into a richly imagined alternate world, keeps you on edge with clever twists and turns, then leaves you breathless as it gallops to its sensational climax!” —Bruce Coville, author of The Unicorn Chronicles series on THE UNICORN QUEST

“Filled with wondrous surprises, fascinating magic, and appealing characters, it hits all the right notes, and I loved every second of it!” —Sarah Beth Durst, author of JOURNEY ACROSS THE HIDDEN LANDS and THE GIRL WHO COULD NOT DREAM on THE UNICORN QUEST

“As dazzling and richly imagined as anything I've read in years. The Unicorn Quest promises to be a must-read.” —Peter Lerangis, New York Times bestselling author on THE UNICORN QUEST