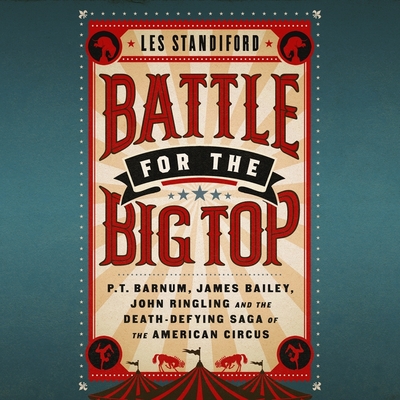 Millions have sat under the "big top," watching as trapeze artists glide and clowns entertain, but few know the captivating stories behind the men who shaped the circus. Battle for the Big Top is the untold story of the battles of the three circus kings--James Bailey, P.T. Barnum, and John Ringling-all vying for control of the vastly profitable and widely influential American Circus.

Standiford recreates a remarkable era when a community--without regard for gender, creed, or nationality--would be captivated by the spectacle created by three diversely talented individuals who transcended the ordinary. Ultimately, the rivalry of these three men resulted in the creation of an institution that would surpass all intentions and, for 147 years, hold a nation spellbound.

Filled with details of their ever-evolving showmanship, business strategies, and personal magnetism, this Ragtime-like narrative will delight and enchant.