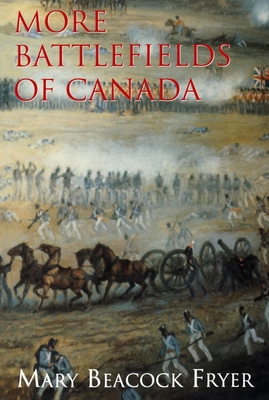 More Battlefields of Canada is a sequel to Mary Beacock Fryers bestselling Battlefields of Canada. Like it's predecessor, this volume covers nearly three hundred years of history and covers the most significant - as well as some of the most comic and bizarre - Canadian battles. Illustrated with sketches, photographs and detailed maps, the individual chapters begin by setting the context of the battle in terms of the larger struggle. The reader is then taken on to the battlefield with an hour by hour account. A brief conclusion to each chapter assesses the consequences for the victor and the loser, assigning each battle it's place in Canadian history.

Not all the battles re-created in this volume were fought in Canada. Some took place in the United states, and there is also an account of the Canadian experience in Hong Kong in 1941.

A detailed chronology provides a comprehensive list of every Canadian battle since the 1600's.

Mary Beacock Fryer brings the same insightful treatment to More Battlefields of Canada that is so evident in her many other books about eighteenth and nineteenth century Canadian history. Her earlier titles include King's Men. Volunteers and Redcoats - Rebel Raiders and many others. The auhtor lives in Toronto.

"There are illustrations, including maps, and ... the narrative flows in an entertaining style."