Perspectives on the Canadian Way of War: Serving the National Interest (Hardcover) 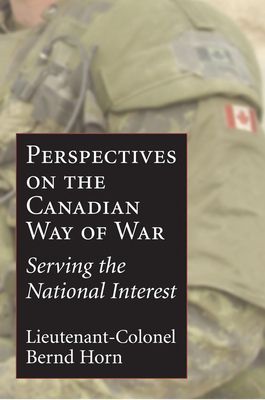 Contrary to popular opinion, this nation has always consciously and consistently utilized military force to further its security, as well as its economic and political well-being. Despite the best of intentions to aid others, the reality is that military force has most often been used to serve the national interest in ways that were not always altruistic but rather to serve practical political purpose.

In the final analysis, the Canadian military experience has been integral to creating the advanced, affluent, and vibrant nation that exists today. This collection of essays, written by such noted historians and authors as Douglas Delaney, Stephen J. Harris, Ronald Haycock, Michael Hennessy, Bernd Horn, and Sean Maloney, spans the entirety of the Canadian military experience and underlines the reality that the government has consistently used its armed forces to achieve political purpose. More often than not, the Canadian way of war has been a direct reflection of circumstance and political will.

Lieutenant-Colonel Bernd Horn is the Commanding Officer of the First Battalion, The Royal Canadian Regiment. He is the honorary historian for both the Canadian Airborne Forces Museum and the Airborne Regiment Association of Canada. His previous Dundurn books include Warrior Chiefs: Perspectives on Senior Canadian Military Leaders and Paras vs the Reich: Canada's Paratroopers at War, 1942-1945.

"For an all-encompassing view of how our military's efforts have helped Canada become the nation it is, this work is a must read."