From the Klondike to Berlin: The Yukon in World War I (Paperback) 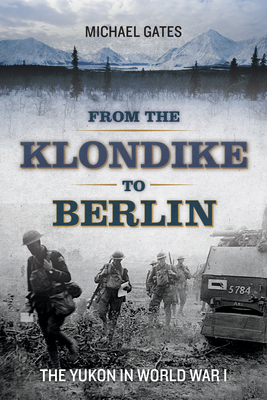 "No part of the Empire has given up more completely of her splendid men than Yukon ... Such being the case, the Dominion should not be forgetful of this region--the Empire's farthest North, and take pride in the encouragement of the spirit that dominates the people of the Land of the Midnight Sun."

Nearly a thousand Yukoners, a quarter of the population, enlisted before the end of the Great War. They were lawyers, bankers, piano tuners, dockworkers and miners who became soldiers, nurses and snipers; brave men and women who traded the isolated beauty of the north for the muddy, crowded horror of the battlefields. Those who stayed home were no less important to the war's outcome--by March of 1916, the Dawson Daily News estimated that Yukoners had donated often and generously at a rate of $12 per capita compared to the dollar per person donated elsewhere in the country. Historian Michael Gates tells us the stories of both those who left and those on the home front, including the adventures of Joe Boyle, who successfully escorted the Romanian crown jewels on a 1,300-kilometre journey through Russia in spite of robbers, ambushes, gunfire, explosions, fuel shortages and barricades. Gates also recounts the home-front efforts of Martha Black, who raised thousands of dollars and eventually travelled to Europe where she acted as an advocate for the Yukon boys. Stories of these heroes and many others are vividly recounted with impeccable research.

Michael Gates was formerly the curator of Collections for Klondike National Historic Sites in Dawson City and pens the popular column "History Hunter" for the Yukon News. He is the author of Dalton's Gold Rush Trail: Exploring the Route of the Klondike Cattle Drives (Harbour Publishing, 2012) and History Hunting in the Yukon (Harbour Publishing, 2010). He lives in Whitehorse, YT.