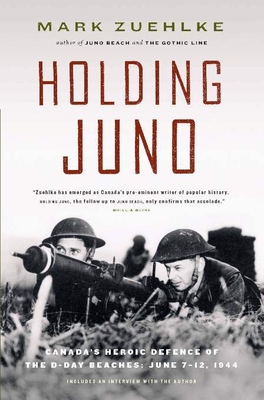 Following his national best-seller, Juno Beach, and with his usual verve and narrative skill, historian Mark Zuehlke chronicles the crucial six days when Canadians saved the vulnerable beachheads they had won during the D-Day landings. D-Day ended with the Canadians six miles inland -- the deepest penetration achieved by Allied forces during this longest day in history. But for all the horror endured on June 6 every soldier knew the worst was yet to come. The Germans began probing the Canadian lines early in the morning of June 7 and shortly after dawn counter attacked in force. The ensuing six days of battle was to prove bloodier than D-Day itself. Although battered and bloody, the Canadians had held their ground and made it possible for the slow advance toward Germany and eventual Allied victory to begin. Holding Juno recreates this pivotal battle through the eyes of the soldiers who fought it, with the same dramatic intensity and factual detail that made Juno Beach, in the words of Quill & Quire reviewer Michael Clark, "the defining popular history of Canada's D-Day battle.