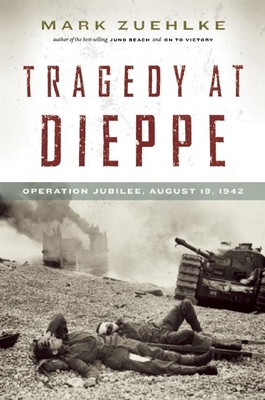 With its trademark you are there style, Mark Zuehlke's tenth Canadian Battle Series volume tells the story of the 1942 Dieppe raid. Nicknamed The Poor Man's Monte Carlo, Dieppe had no strategic importance, but with the Soviet Union thrown on the ropes by German invasion and America having just entered the war, Britain was under intense pressure to launch a major cross-Channel attack against France. Since 1939, Canadian troops had massed in Britain and trained for the inevitable day of the mass invasion of Europe that would finally occur in 1944. But the Canadian public and many politicians were impatient to see Canadian soldiers fight sooner. The first major rehearsal proved such a shambles the raid was pushed back to the end of July only to be cancelled by poor weather. Later, in a decision still shrouded in controversy, the operation was reborn. Dieppe however did not go smoothly. Drawing on rare archival documents and personal interviews, Mark Zuehlke examines how the raid came to be and why it went so tragically wrong. Ultimately, Tragedy at Dieppe honors the bravery and sacrifice of those who fought and died that fateful day on the beaches of Dieppe.

Mark Zuehlke is the author of the critically acclaimed Canadian Battle series and many other books. Having worked as a journalist, been educated as a historian, and written award-winning fiction, he draws on these varied skills and experiences to bring history to life for a general audience. The Canadian Battle series, of which Tragedy at Dieppe is the tenth volume, is the most detailed accounting of any army during World War II ever written by a single author. Zuehlke lives in Victoria.