Start with the Trouble: Poems (Paperback) 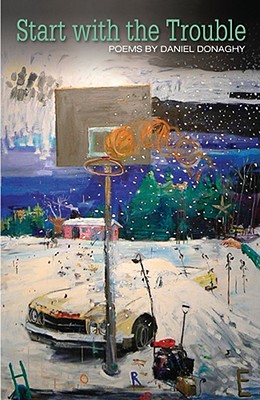 By Daniel Donaghy
Email or call for price

In his second collection of poems, Daniel Donaghy uses the power of poetry to connect the Kensington section of Philadelphia he knew as a boy––a place replete with crime, poverty, fractured families, and various other kinds of darkness––to upstate New York’s woods, rural Connecticut’s town greens and small churches, Vancouver’s back alleys, the killing ground of the 1864 Sand Creek Massacre in Kiowa County, Colorado, and the shores of ancient Greece. In doing so, he examines the relationship between memory and identity and strives to give voice to those who might otherwise be forgotten by history. Start with the Trouble is the place of fist fights and first kisses, where we sit beside the dying and where we sing to those not yet born. It is where Michelangelo’s Pieta recreates itself on a Kensington sidewalk, where a mother watches helplessly as two older boys dangle her son from the roof of a building, where a prostitute writes poems between tricks before she disappears without a trace. It is where Bruce Springsteen goes back in time to woo Circe and the Sirens, where a father returns from the dead in the voice of Babe Ruth, where a mother’s spirit rises from the shadows of spruce trees, where Santa forsakes his reindeer and slides into town behind sled dogs. It is where simple gestures such as opening a car trunk or loading a wheelbarrow become portals into faraway, nightmarish worlds in which the young are forced to bear too much witness to the world. Start with the Trouble is a place where beauty exists amidst every kind of ugliness, and where that beauty is made even more precious because of the depths from which it rises.

Daniel Donaghy was raised in Philadelphia and is the author of Streetfighting, a Paterson Poetry Prize finalist. He is assistant professor of English at Eastern Connecticut State University and has received artist grants from the Connecticut Commission on Culture and Tourism and the Constance Saltonstall Foundation.

“Start with the Trouble is a memory-haunted book. Returning to the mean streets of Philadelphia, to an ‘El-darkened neighborhood,’ Donaghy tells stories of fathers home from aching labor, of kids who quit school, get in fights or accidents, drift off, or disappear. In the end, this is a hymn to lives that don’t flower, shot through with loss and, finally, redemption.” —Kim Addonizio, author of Ordinary Genius “Donaghy takes us to a corner of the City of Hope where hope ‘such a simple word’ exists as a complex illusion amidst the city’s everyday cruelties. You won’t find this corner on any tourist map. Here, survival is the only monument. While many of these poems look back, it is not with nostalgia but with desperation to preserve those who have been lost. These poems exist because they have no choice. . . . Donaghy is the real deal. He’s not striking any poses or doing any fancy dances. These poems grab you by the collar and compel you to listen.” —Jim Daniels, author of Revolt of the Crash-Test Dummies “Dan Donaghy could have been a stonecutter, but he chose to work something harder. Amazing, in these finely sculpted poems, how beautiful trouble and loss and pain can be, how excruciatingly pleasureable. We begin, and so often end, in trouble, a fact these poems do not deny. But, still, Donaghy tells us, trouble is not all we have.” —Jake Adam York, author of A Murmuration of Starlings “Poem after poem offers the consolation of a thoughtful human spirit who struggles with the blackness and is not broken. Never peripheral to human experience, Donaghy’s poems, centered in the heart, teach us to preserve.” —Vivian Shipley, author of Hardboot: New and Old Poems