Once More unto the Speech, Dear Friends: The Tragedies (Applause Books) (Paperback) 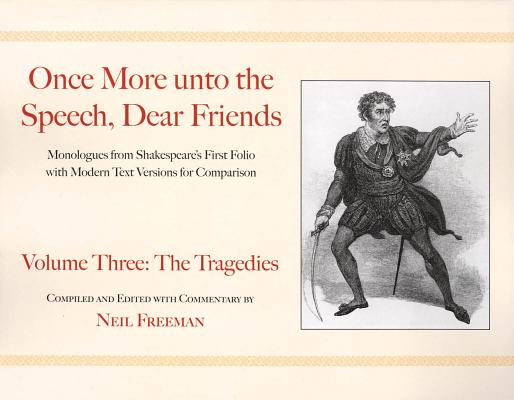 By William Shakespeare, Neil Freeman (Other)
$22.95

There has been a great change in the last twenty years to actor auditions, which now require the demonstration of enormous flexibility. The actor is often expected to show more range than ever before, and often several shorter audition speeches are asked for instead of one or two longer ones. To stay at the top of his or her game, the Shakespearean actor needs more knowledge of what makes the play tick, especially since the early plays demand a different style from the later ones. Each genre (comedy, history, tragedy) has different requirements. No current monologue book deals directly with the bulk of these concerns. One More unto the Speech, Dear Friends now fills that gap. This three volume set will help actors discover the extra details of humanity that the original folio texts automatically offer. Of Shakespeare's 37 plays, only Pericles is not included. In the trilogy of books there are over 900 separate audition possibilities. This represents about 600 more monologues than are available in any other series. There are four parts to each speech: - A background giving context and approximate timing; - A modern text version; - The original folio version; - Commentary to explain the differences between the two texts including full discussion of the devices peculiar to that speech's genre, the age and gender of the character, and more.

Neil Freeman is currently associate professor of theatre at the University of British Columbia in Vancouver. He also holds the position of master teacher with Shakespeare & Company in Lenox, Massachusetts. His groundbreaking work in using the first printings of the Shakespeare texts in performance and in the classroom has led to lectures at the Shakespeare Association of America and workshops at both the Association of Theatre in Higher Education and the Voice and Speech Association. He prepared and annotated the 36 individual Applause First Folio Editions of Shakespeare's plays.