Star Trek FAQ (Unofficial and Unauthorized): Everything Left to Know about the First Voyages of the Starship Enterprise (FAQ (Applause)) (Paperback) 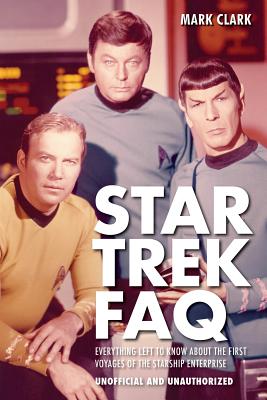 This book is not endorsed, sponsored, or affiliated with CBS Studios Inc., Paramount Pictures, or the "Star Trek" franchise. Star Trek FAQ tells the complete story of Star Trek, from the before the beginning (the books, films, and TV shows that inspired producer Gene Roddenberry to create Star Trek) until after the end (when the show emerged as a cultural phenomenon in syndication), and including dramatic behind-the-scenes stories (e.g., Leonard Nimoy's struggle with alcoholism and actress Grace Lee Whitney's controversial firing) often omitted from "authorized" histories of the program. Along with in-depth looks at the pre- and post-Trek careers of the show's iconic leads, Star Trek FAQ includes profiles of guest stars and "redshirt" extras alike, as well as the many writers, technicians, and artisans whose efforts enabled Star Trek to take flight. The book also explores the show's unprecedented resurgence in the 1970s with chapters devoted to early Star Trek fiction, merchandising, and the short-lived animated series. Combining a wealth of fascinating information about every facet of the show's production with original analysis of Star Trek's enduring appeal and cultural influence, Star Trek FAQ goes where no Star Trek book has gone before.