Code Over Country: The Tragedy and Corruption of SEAL Team Six (Hardcover) 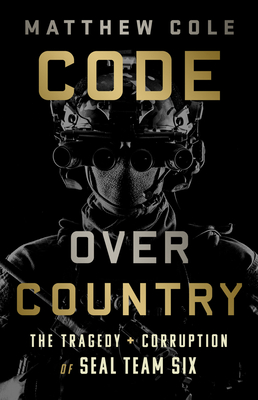 A hard-hitting exposé of SEAL Team 6, the US military’s best-known brand, that reveals how the Navy SEALs were formed, then sacrificed, in service of American empire.

The Navy SEALs are, in the eyes of many Americans, the ultimate heroes. When they killed Osama Bin Laden in 2011, it was celebrated as a massive victory. Former SEALs rake in cash as leadership consultants for corporations, and young military-bound men dream of serving in their ranks.

But the SEALs have lost their bearings. Investigative journalist Matthew Cole tells the story of the most lauded unit, SEAL Team 6, revealing a troubling pattern of war crimes and the deep moral rot beneath authorized narratives. From their origins in World War II, the SEALs have trained to be specialized killers with short missions. As the wars in Iraq and Afghanistan became the endless War on Terror, their violence spiraled out of control.

Code Over Country details the high-level decisions that unleashed the SEALs’ carnage and the coverups that prevented their crimes from coming to light. It is a necessary and rigorous investigation of the unchecked power of the military—and the harms enacted by and upon soldiers in America’s name.

Matthew A. Cole is an investigative journalist at The Intercept. He has covered national security since 2005, reporting extensively on the CIA's post-9/11 transformation, on the conflicts in Afghanistan and Pakistan, and on the U.S.'s intelligence operations. He was previously an investigative producer for ABC and NBC News, and has written for GQ, Salon, Details, ESPN, and New York. He has won a Deadline Club Award and has received two Emmy nominations for his reporting. A graduate of Columbia's Graduate School of Journalism, Cole lives in Brooklyn with his family.

“Matthew Cole has produced a searing and unvarnished history of a state-sponsored organized crime syndicate that operates globally with impunity bestowed upon it by the United States government. Since 9/11, Navy SEAL Team 6 has been elevated to legendary status in the media, and its members showered with medals and accolades from presidents, especially in the aftermath of the raid that killed Osama bin Laden. Through an even-handed accounting of the failures and successes of SEAL Team 6, from its Cold War origins to the present, Cole has masterfully documented the bloody, dark underbelly of these ‘quiet warriors.’ He exposes the sociopaths and murderers who operate on the tip of the spear of the covert US war machine, along with the military and political leaders who have shielded them from accountability. Code Over Country is a meticulously crafted corrective aimed at dismantling the dishonest mythology that dominates the public understanding of the most elite fighting force in US history.”
—Jeremy Scahill, New York Times–bestselling author of Blackwater: The Rise of the World’s Most Powerful Mercenary Army and Dirty Wars: The World is a Battlefield

“Matthew Cole is telling us what we, in America, need to know about some of those men celebrated in movies and media as heroes in SEAL Team 6. The real issue, as Cole makes clear, is the leadership and command structure that shields and protects criminal behavior. This is not a book about heroism, although there is much, but tolerated wrongdoing.”—Seymour Hersh, Pulitzer Prize–winning author of Chain of Command: The Road from 9/11 to Abu Ghraib

“Matthew Cole’s Code Over Country is a remarkable achievement. Cole has flanked the hagiography that has for so long protected the image of SEAL Team 6, and has cut deep behind the lines to tell the brutal truth. After reading this book, I realized that there is the Hollywood version of SEAL Team 6, and then there is the truth, laid bare by Matthew Cole.”—James Risen, Pulitzer Prize–winning author of the forthcoming The Last Honest Man: How Frank Church Fought the CIA, the Mafia, J. Edgar Hoover, and the National Security State

“Journalist Cole debuts with a searing investigation… Backed by meticulous research and lucid insights into SEAL culture, this is an impassioned and persuasive call for reforming one of the world’s most elite fighting forces.”—Publishers Weekly

“The strongest rebuke Special Operations, specifically, the SEAL community has yet faced during the War on Terror…Code Over Country is issuing the real report card, the one that Special Operations Command and Naval Special Warfare have been desperate to hide for decades. While outstanding journalistic works have been produced about the SEALs, Code Over Country examines the entire Navy SEAL enterprise, and where it came off the rails.”—Connecting Vets